Our understanding of the molecular pathogenesis of neuroinflammation is growing steadily. Progress in different areas of basic research, new animal models, and the generation of specific antibody markers to target essential proteins help to find and improve the treatment of patients with neuroimmunological diseases.

In this white paper, we discuss the role of microglia, oligodendrocytes, and astrocytes in the neuroinflammatory processes highlighting the relevant antibody markers with a particular focus on multiple sclerosis.

Neuroinflammation broadly defines the collective reactive immune response in the brain and spinal cord in response to injury and disease. Inflammation in the central nervous system (CNS) is commonly associated with various degrees of tissue damage, such as loss of myelin and neurons.

The neuroinflammatory process is complex and involves disrupting the blood-brain barrier (BBB), peripheral leukocyte infiltration, edema, and gliosis. The inflammatory response is characterized by a host of cellular and molecular aberrations within the brain.

Neuroinflammation arises within the CNS through phenotypic changes of different non-neuronal cell types in the brain, such as microglia, oligodendrocytes, and astrocytes, causing the release of various cytokines and chemokines, and finally, recruitment and infiltration of peripheral blood cells, mainly T-and B-cells, into the brain parenchyma1,2,3.

Neuroinflammatory processes are the key causative factors behind the brain and spinal cord injury. This is true not only for acute brain trauma and hypoxic-ischemic brain damage following a stroke but also for chronic infection and neurodegenerative diseases, such as Alzheimer's disease, amyotrophic lateral sclerosis (ALS), Lewy body dementia, and leukoencephalopathies like multiple sclerosis (MS). In addition, local peritumoral inflammation plays a role in the clinical progression and malignancy of glioblastomas, the most aggressive primary brain tumors.

Recent studies have revealed unexpected insights by providing hints of a protective role of inflammation.

Activated Microglia: the Hallmark of Neuroinflammation

Microglia accounts for 10-15% of all cells found within the brain. They are the first-line defense innate immune cells, commonly regarded as "brain resident macrophages" and the sole resident immune cell type in the CNS4.

The microglia cells are multitasking and instrumental for maintaining the brain and spinal cord's essential regulatory and homeostatic functions.

Different cues produced within the CNS tissue microenvironment choreograph the microglia specification to enable the dramatic changes of the activation state of these cells.

Single-cell molecular RNA-profiling of microglia isolated from the brains of patients with MS and Alzheimer ́s disease has enabled the discovery of novel microglia subtypes with unusual properties.

Microglial cells are very plastic and readily adopt into distinct phenotypes, including the classical activated "proinflammatory" (M1) state and the alternatively activated "immunomodulatory" (M2) state in response to various stimulations5.

In fact, as antigen-presenting cells (APC), microglia are endowed with the ability to release proinflammatory cytokines and chemokines into the CNS tissue microenvironment. The alternatively activated M2 microglia cells, on the other hand, are neuroprotective.

Activated microglia are the primary regulators of the pro-and anti-inflammatory microenvironment of the CNS. In the pathogenesis of Alzheimer ́s disease, microglia participate in amyloid Aβ- plaques formation and the associated pathology.

A substantial buildup of amyloid Aβ in AD-patients induces inflammation and glial cell activation leading to a vicious cycle and increased Aβ- formation. Microglial phagocytosis of Aβ fibrils and the proinflammatory activation that follows involve a complex proinflammatory pathway mediated by CD36, CD49, and TLR4, among others. Also, cytokine-mediated activation of microglia induces neuroinflammation per se and subsequent neuronal loss.

Critical Role of Macrophages, Oligodendrocytes, and Astrocytes in Neuroinflammation

Macrophages play definite roles in neuroinflammation, where they participate in the initiation, maintenance, and resolution of inflammation. This lineage of non-brain parenchymal monocytes derives from hematopoietic precursors in the bone marrow, whereas, as mentioned above, microglia are parenchymal cells of the CNS and originate from a myeloid precursor in the fetal yolk sac.

Both macrophages and microglia share CD68 and CD163 expression; however, macrophages display a higher constitutional expression of HLA-DR than microglia.

Oligodendrocytes are responsible for axonal myelination in the CNS white matter but are not generally thought of as being directly engaged in neuroinflammation.

In MS and Experimental Allergic Encephalitis (EAE) model, however, oligodendroglia precursor cells (OPCs) develop a distinctly disease-specific immune phenotype, "immune- OPCs" 7. This specific immune-OPC phenotype is antigen-presenting and phagocytosing and can support T-cell proliferation and survival, actively contributing to the neuroinflammation occurring in EAE and MS. OPCs isolated from white matter of MS-patients have been defined by single-cell epigenomic analysis by their increased chromatin accessibility at immune genes.

Astrocytes are star-shaped glial cells that constitute one-third of the cell population in the CNS. They regulate neuroprotective homeostasis in the CNS but also become reactive with proinflammatory properties during neuroinflammation8.

Under inflammatory conditions, astrocytes in the CNS proliferate massively and become hypertrophic. This growth is associated with strong upregulation of glial fibrillary acidic protein (GFAP), leading to the so-called astroglial scarring (the counterpart to scarring in peripheral tissues).

Proinflammatory astrocytes actively secrete inflammatory mediators, including cytokines. Transcriptomic profiling of reactive astrocytes in neuroinflammation and ischemia has revealed two distinct forms of astrocytes: A1 and A2. The A1 astrocytes display enhanced levels of neuron-damaging complement cascade proteins, whereas the A2 phenotype is prevalently anti-inflammatory and neuroprotective.

It appears that a neurotoxic factor secreted from A1 astrocytes is detrimental to motor neurons in ALS, but not in healthy individuals. The proinflammatory astrocyte state also contributes to the pathogenesis of ALS.

A Selection of Antibody Markers

Table 1 lists a selection of antibody markers for neurons and the different types of non-neuronal cellular populations involved in neuroinflammation processes.

Examples of mixed microglia/macrophage markers are the clusters of differentiation CD68 and CD163. 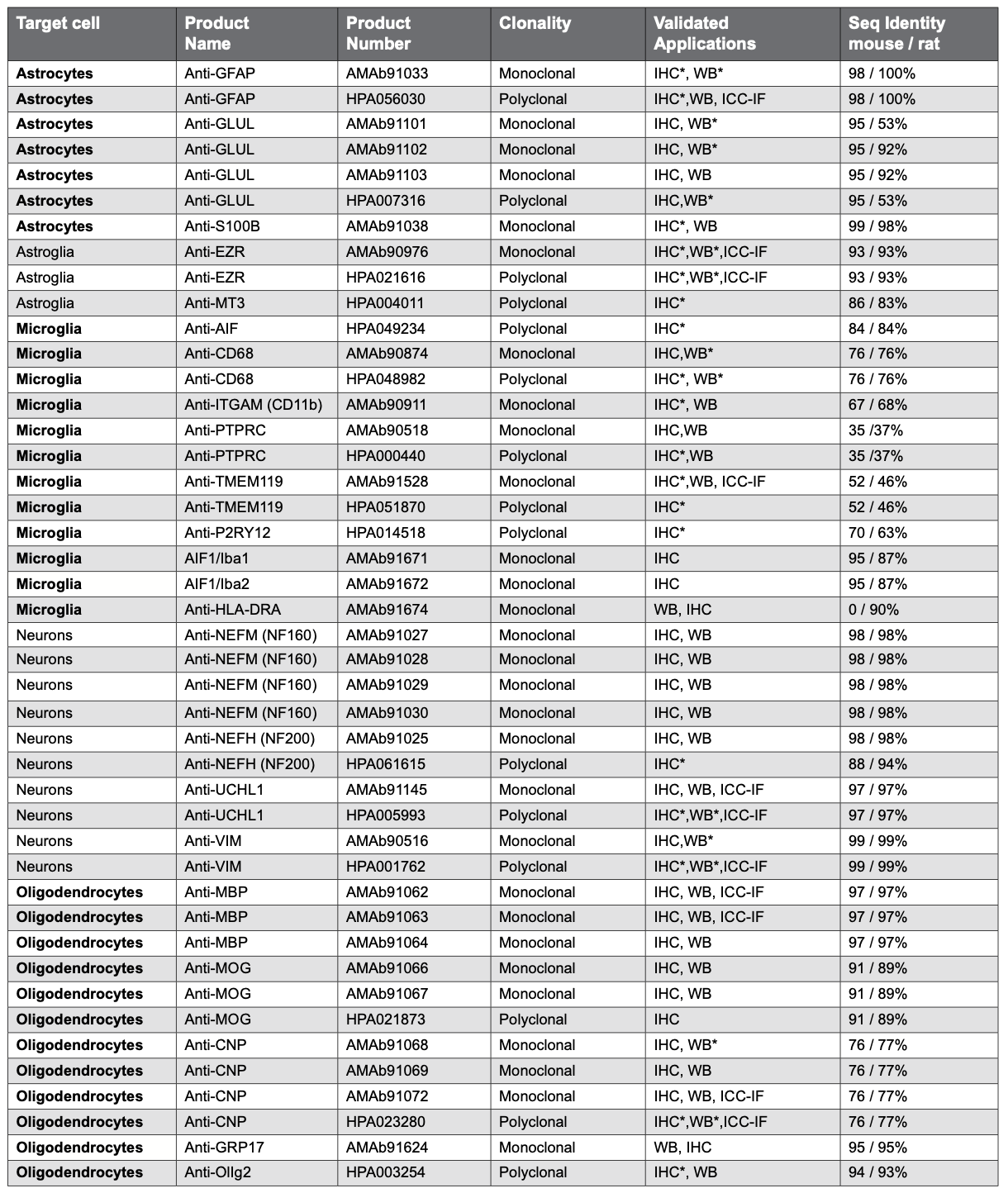 Multiple sclerosis (MS) is a human-specific, chronic inflammatory, and neurodegenerative CNS disease and the most prevalent chronic neurological disability in young adults.

Demyelination is the primary pathological event in MS, followed by reactive gliosis and edema. Neuroinflammation affects both white and grey matter, a process that engages activated microglia. It appears that stressed immune OPCs, reactive astrocytes, and activated microglia become most prevalent towards the rim of the MS lesions. The cumulative axon loss and grey matter atrophy seen in chronic MS result in neurodegeneration, progressive disability, and cognitive deficits.

A combination of environmental and genetic factors converges into disease progression. MS is an autoimmune disease in which aberrant T-cell and B-cell activation of the adaptive response triggers the tissue-damaging inflammatory response.

The inflammatory response primarily involves the degradation of the myelin layers that wrap the axons of the white matter, pathogenic multifocal neuroinflammation, and the buildup of demyelinated plaques. These alterations derail the neuronal communication within the CNS and, importantly, between the brain and the peripheral organs.

The specific neuroinflammation in MS is initiated and reinforced by humoral factors, mostly autoreactive antibodies and infiltration of myelin- autoreactive HLA-DR15 class II-restricted CD4- positive helper T-cells of the helper type 1 (Th1) and helper Type 2 (Th17) subclasses. At later stages, this is followed by the CD8-positive effector of the T-and B-cells involvement via the compromised BBB9.

The neuroinflammatory response in MS is modulated by the local presence of immunosuppressive FoxP3-positive regulatory T-cells (Tregs) favoring the progression of the recovery phase in recurrent MS. 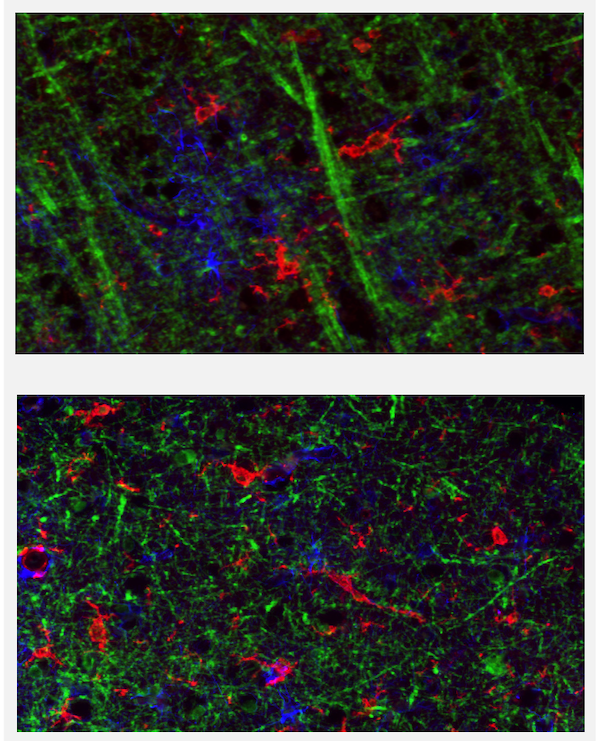 The absence of oligodendrocyte renewal in MS- patients suggests that remyelination is absent or very rare, and if so, regenerate by the action of mature pre-occurring oligodendrocytes. 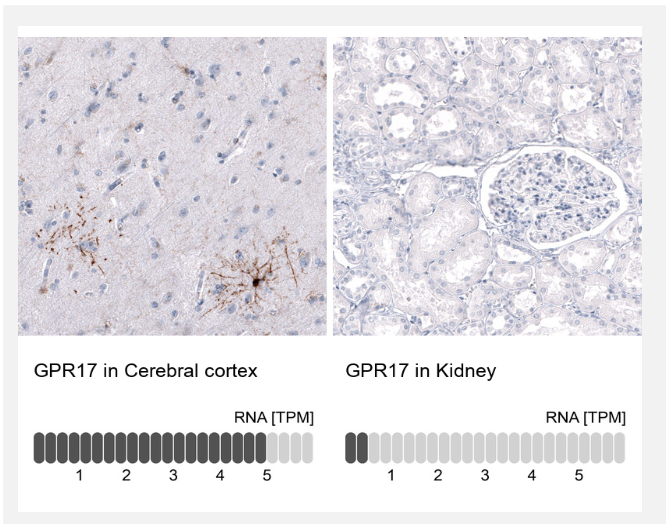 Figure 8: Oligodendrocytes in human cortical tissue. IHC of the human cerebral cortex (left) and kidney (right) tissues using Anti-GPR17 monoclonal antibody (AMAb91624), Oligodendrocytes in the cerebral cortex are visible in brown. The orthogonal enhanced validation of the Anti-GPR17 antibody shows the corresponding GPR17 RNA-seq data (RNA-TPM) for the same tissues. Note that no GPR17 staining is visible in the kidney tissue according to the RNA levels.

Different mammalian species such as mice, rats, and primates are suitable animal models to study EAE. However, although EAE strongly mimics the human MS, it fails to cover all aspects of the human condition. 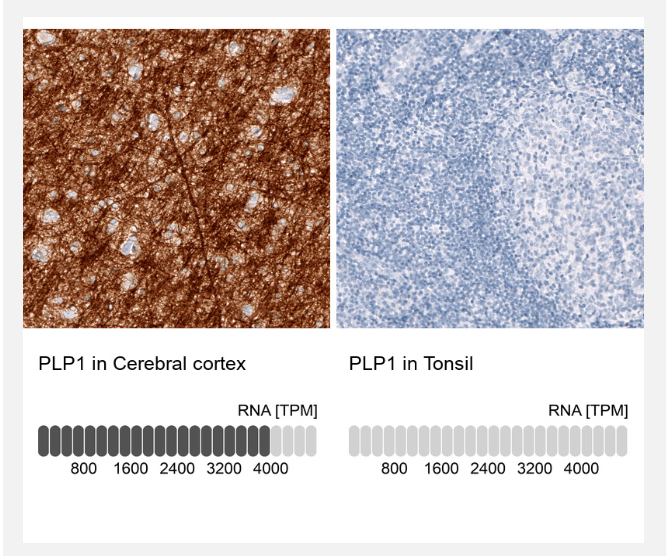 Figure 9: Myelinated axons in human cortical tissue. IHC of the human cerebral cortex (left) and tonsil (right) tissues using Anti-PLP1 monoclonal antibody (AMAb91639). Cortical myelinated axons are visible in brown. The orthogonal enhanced validation of the Anti-PLP1 antibody shows the corresponding PLP1 RNA-seq data (RNA-TPM) for the same tissues. Note that no PLP1 staining is visible in the tonsil tissue according to the RNA levels.