QPrEST standards are used for the determination of absolute protein concentrations in biological samples.

The sample of interest is spiked with QPrEST standard, digested and analyzed by mass spectrometry (MS). Signals from endogenous peptides are compared to those of QPrEST peptides and the resulting light to heavy (L/H) ratios are used to determine the absolute quantity of the endogenous protein in the sample. The QPrEST standards are easily incorporated into existing sample preparation workflows. Some general advice on handling the QPrESTs and suggested step by step protocols are presented below. 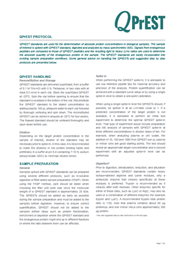 QPrEST standards are delivered lyophilized, from a buffer of 0.1 M Tris-HCl with 5 % Trehalose, in two vials with at least 0.5 nmol in each vial. Store the lyophilized QPrEST at -20°C. Spin the vial prior to opening to ensure that the standard is localized in the bottom of the vial. Reconstitute the QPrEST standard to the stated concentration by adding exactly 100 µL ultrapure water to each vial followed by thorough vortexing and spin down. The reconstituted QPrEST can be stored in aliquots at -20°C for four weeks. The thawed standard should be vortexed thoroughly and spun down prior to use.

Depending on the target protein concentration in the sample of interest, dilution of the standard may be necessary prior to spike-in. In this case, it is recommended to make the dilutions in low protein binding tubes and preferably in a buffer at pH 8.0 containing 7-10 % sodium deoxycholate (SDC) to minimize dilution errors.

Samples spiked with QPrEST standards can be prepared using several different protocols, such as in-solution digestion or filter-aided sample preparation (FASP). When using the FASP method, care should be taken when choosing the filter unit pore size since the molecular weight of a QPrEST standard is approximately 25 kDa. The QPrESTs should be added as early as possible during the sample preparation and must be added to the samples before digestion. However, to ensure correct quantification, QPrEST should not be added to the samples before steps such as protein fractionation, enrichment or depletion where the QPrEST standard and the endogenous protein might end up in different fractions or where the ratio between them can be affected.

When performing the QPrEST spike-in, it is advisable to use low retention pipette tips for maximal accuracy and precision of the analysis. Protein quantification can be achieved with a standard curve setup or by using a single spike-in level to obtain a one-point calibration.

When using a single spike-in level the QPrESTs should, if possible, be spiked in at an L/H-ratio close to 1. If a predicted concentration of the target protein is not available, it is advisable to perform an initial test experiment to determine the optimal QPrEST spike-in level. That type of experiment would include preparation and MS analysis of samples with QPrEST spike-in at three different concentrations in dilution steps of ten. For example, when analyzing plasma or cell lysate, the addition of 10, 100 and 1000 fmol QPrEST per µL plasma or per million cells are good starting points.  The test should reveal an approximate target concentration and a second experiment with an adjusted spike-in level can be performed.

Prior to digestion, denaturation, reduction, and alkylation are recommended. QPrEST standards contain heavy isotope-labeled arginine and lysine residues, why a proteolytic enzyme that cleaves specifically at these residues is preferred. Trypsin is recommended as it cleaves after both residues. Other enzymes specific for either of these sites, such as LysC or ArgC, may also be used or alternatively a combination of different enzymes (for example trypsin and LysC). A recommended trypsin total protein ratio is 1:50, note that plasma contains about 60 µg protein/µL and one million HeLa cells approximately 300 µg of protein.

Most proteomics data analysis software provides the functionality to easily export ratios between light and heavy peptides, from which the endogenous protein concentration can be determined. Since QPrEST standards can cover multiple peptides, several L/H ratios for the target protein will possibly be generated. The protein concentration can either be determined directly from the L/H ratios (single-point calibration) or by comparison to standard curves.

In general, the digestion efficiency is very similar between the endogenous protein and QPrEST standard. This means that even peptides containing missed cleavage sites in most cases show similar L/H ratios as fully tryptic peptides and therefore can also be used for quantification.

Occasionally separate peptides from the same QPrEST show different L/H ratios. There are several possible explanations for this such as post-translational modifications being present on one of the endogenous peptides, different protein isoforms present in the sample or the presence of natural sequence variants.

Examples of step by step protocols for digestion of different protein sample types are described below. Prior to MS analysis, peptide desalting can be performed. A number of different products from different suppliers are available for this purpose, alternatively, desalting tips with C18 matrix can be generated in-house.