Laminin proteins are the major components of the basement membrane. They are crucial for a wide variety of biological processes, such as cell adhesion, migration, embryonic development, differentiation, and phenotypic stability. Laminins are a family of conserved multidomain, trimeric proteins that are part of the extracellular matrix structure. They are composed of three different subunits; an α-chain, a β-chain, and a γ-chain, that can be found in five (α1-5), three (β1-3), and three (γ1-3) genetic variants respectively.

The Laminin Markers were developed in collaboration with the Swedish biotech company BioLamina AB. With the use of BioLamina’s human recombinant laminin isoforms, PrecisA Monoclonals selectively recognize the specific subunits of the laminins.

In order to select for specificity and rule out any cross-reactivity, the validation was carried out in different applications such as ELISA, Western blot, and immunohistochemistry.

By choosing the proper PrEST Antigens our laminin antibodies are specific for each subunit without any cross-reactivity.  The PrecisA Monoclonal antibodies are developed using stringent conditions. We guarantee secured continuity and stable supply. 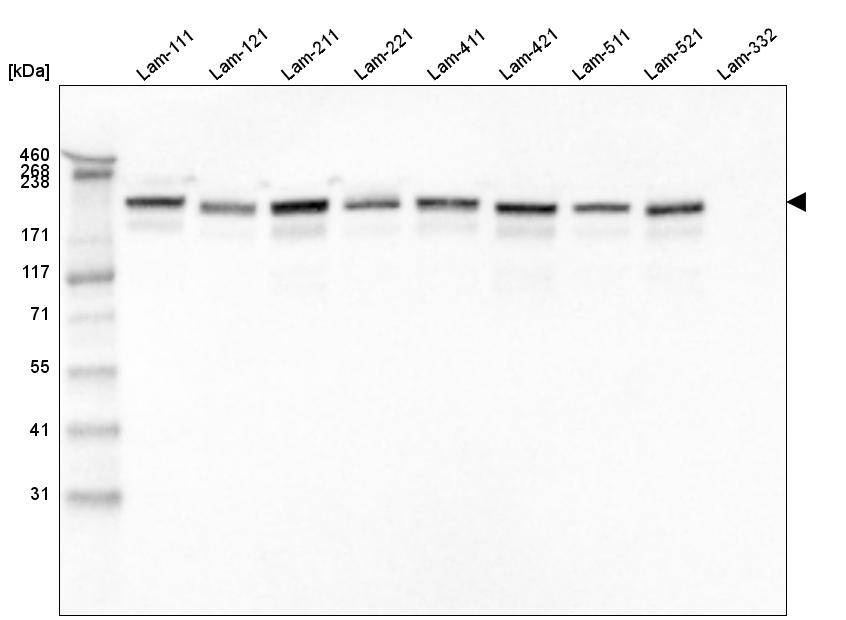 The complete laminin marker antibody panel is presented in our product catalog.

Combine the different laminin antibodies to target specific laminins. For example, laminin-421 consists of alpha 4, beta 2, and gamma 1 and will be detected by the Anti-LAMA4, Anti-LAMB2, and Anti-LAMC1 antibodies from the marker panel.

LAMC1: an example of the development of specific laminin antibodies.

The laminin antibodies are carefully selected to recognize only one specific laminin subunit. The antibody selection process starts already during the antigen selection phase and continued throughout the development and QC processes.

Here we show how a monoclonal antibody targeting laminin gamma 1 (Anti-LAMC1) has been developed and selected through our process and can be used to detect Laminin gamma 1 expression in tissue.

All our laminin antibodies have gone through an ELISA-based functional characterization screening to confirm that they are specific for the corresponding laminin subunit without cross-reactivity with other subunits. This has been done using ELISA plates coated with different human recombinant laminin isoforms.

For further characterization, we have confirmed subunit specificity in WB using the same human recombinant laminins as for ELISA. The data below shows that the antibody only detects its specific subunit and does not display any cross-reactivity.

Finally, the antibodies were tested by IHC (see below) to confirm protein expression in relevant tissues and the absence of non-specific staining.

Taken together data confirms that the Anti-LAMC1 antibody is highly specific and selective for its target subunit in various applications.

Laminin-521: an example of how laminin antibodies can be used for the detection and recognition of specific laminin subunits.

The data below demonstrates how our PrecisA Monoclonal antibodies against the laminin alpha 5, the beta 2, and the gamma 1 subunits can be used to detect the presence of laminin-521 in the kidney. The monoclonal antibodies used for this staining belong to different IgG isotypes, including IgG1, IgG2a, and IgG2b, which makes it possible to use them for multiplex IHC on the same tissue section.