Ischemic stroke remains a leading cause of death and long-term disability through an irreversible “ischemic cascade,” including disrupted energy balance related to variations in oxygen and glucose concentrations and the depletion of cellular energy stores and release of inflammatory mediators. Increasing evidence has demonstrated that activating endogenous neural stem progenitor cells (NSPCs) can pave the way for the augmented long-term experimental recovery of injured brain tissue.

This study indicates that the sodium-vitamin C cotransporter 2 (SLC23A2 or SVCT2), is mainly expressed in the brain and located in NSPC of the inner and outer subventricular zone, promotes the migration of NPSCs through CDC42 activation to facilitate F-actin assembling, which importantly enlarges the therapeutic scope of ascorbic acid and the role of SVCT2 in NSPCs migration after brain injury. 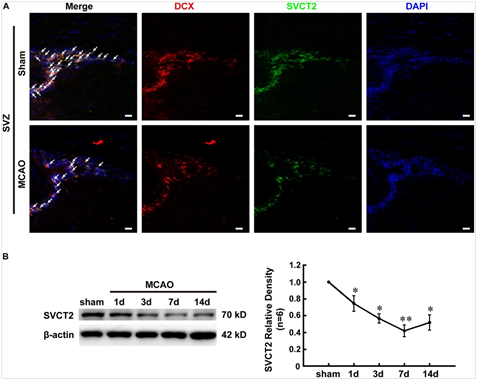 Figure 1. SVCT2 down-regulation might attenuate the regenerative ability resulting from NSPCs after ischemia. (A) Representative immunostaining of co-labeled DCX and SVCT2 at SVZ on day 7 in group Sham and MCAO. DAPI was used to label the nuclei. White arrows indicated co-labeled DCX+ and SVCT2+ NSPCs. Scale bar: 20 μm. (B) Representative immunoblotting images and quantitative analysis of SVCT2 at SVZ on days 1, 3, 7, and 14 in group Sham and MCAO. Image from Yang et al. 2019.

This study uncovers the regulatory role of the proteins ZC4H2 (a Zn-finger protein) and RNF220 (an E3 ubiquitin ligase) in NSCs proliferation and differentiation. Mutations in ZC4H2 can cause clinical arthrogryposis multiplex congenita, intellectual disability, epilepsy, hypotonia, and other ZC4H2-associated rare disorders. The main finding of the study is that ZC4H2/ RNF220-complex causes an upregulation of the neuronal cell-lineage protein Cend-1. Hence the authors could show that ZC4H2 and RNF220 are required in neural stem cell proliferation and differentiation through Cend1. 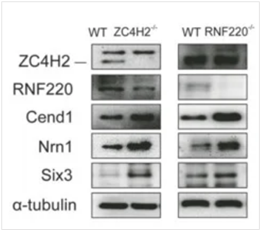 This study investigated the expression of Arid1A in sensory neurons and RGCs. Additionally, profiling the chromatin accessibility and gene expression profiles in mature RCCs was executed to discover the mechanisms of how Arid1A modulates neuronal survival. The study showed Arid1A -deletion reduced the signal at the Socs3 loci associated with a lowered level of Socs3 mRNA. The signaling protein Socs3 is a known promoter of axonal regeneration and RGC-survival after optic nerve injury.

In this study, the Atlas Antibodies polyclonal anti-ARID1A antibody (HPA005456) was used as the primary reagent.

Figure 3. Arid1a expression is downregulated in retinal ganglion cells (RGCs) after optic nerve crush (ONC). (A) Retinal sections from C57BL/6 mice of different time points post-crush were collected and stained with Tuj1 (red) and ARID1A (green). Scale bar: 20 μm. (B) Quantification of relative fluorescence intensity of ARID1A staining in RGCs. Uninjured was used for normalization, for 1 dpc, ns, no significance; for 3 dpc, **p < 0.01; for 7 dpc, *p < 0.05. RGCs were analyzed from at least eight non-adjacent retinal sections for each animal from three mice per group—image from Peng et al. 2020.

Dr. Kristian Moller is a Principal Scientist at Atlas Antibodies. He holds a Ph.D. in Molecular Neurobiology from the Medical Faculty at Lund University Sweden. Kristian has a profound national and international R&D experience as a specialist in applied molecular histology from the private pharmaceutical, diagnostic and immunotherapy sectors. There his work has emphasized on research devoted to tumor diagnostic antibodies, T-cell mediated cancer immunotherapies and early drug discovery within dermatology. In addition to his general expertise in tissue biomarkers, he is strongly specialized in the technical aspects of immunohistochemistry and RNA in situ hybridization.