Our antibodies and QPrEST protein standards are used in cutting-edge neuroscience research. All our neuroscience products are highly validated and tailor-made for research on signaling, neural lineage, developmental processes, aging, and neurodegenerative disorders.

Our primary antibodies are created using a unique antigen design for optimal specificity, affinity-purified using the immunogen, and manufactured using a standardized production process to ensure the highest quality.

Let's take a look at three recent studies showing our products in action.

LBD diagnosis is often achievable upon post-mortem examination due to the overlap in symptoms with other disorders. This is why there is a need for new and accurate biomarkers to identify and categorize patients with the disease.

In this work, the authors used mass spectrometry (to identify) and ELISA (to validate) six promising biomarkers in the cerebral spinal fluid of LBD patients. The results suggest these candidate biomarkers promise to improve diagnostic accuracy in living patients, particularly when used as a panel.

Figure 1. Results of discovery proteomics. A. Heatmap and cluster analysis of differentially expressed proteins (n = 69) in cohort 1. The heatmap shows distinct patterns of up-and down-regulated proteins in the clinical groups. The branching pattern of the dendrogram shows an almost complete separation of patients with DLB from cognitively normal controls (35/40 (87.5%) were clustered correctly). Fifteen DLB patients were assigned to cluster 1 (red), and five DLB patients and 20 controls were assigned to cluster 2. The five DLB patients in cluster 2 clustered together in a small subgroup (cluster 2A, purple), and the controls clustered together in another subgroup (cluster 2B, blue). B. Volcano plot representing the top biomarker candidates discriminating DLB from controls. The horizontal axis indicates log2 fold change. The vertical axis indicates − 10 log p-values. Each point represents a protein. Points at the far right- and left-hand sides of the plot have the largest fold changes, while those along the top of the plot are the most statistically significant. The non-axial red dotted vertical lines denote fold change thresholds of 1.2. The non-axial red dotted horizontal line denotes a p-value threshold of 0.05. Proteins in red have a fold change > 1.2 and p-value < 0.05. The top-10 biomarker candidates are highlighted in the plot. Image from van Steenoven et al. 2020.

The mitochondrial protein sideroflexin 3 (Sfxn3) is one of the main Sfxn proteins responsible for transporting the amino acid serine into mitochondria during one-carbon metabolism.

Sfx3n is highly expressed in the brain and thought to be involved in Parkinson´s disease's neurodegenerative process.

In this study, the authors took a detailed look into the spatiotemporal brain localization of Sfx3n in the rat. They found a sharp mitochondrial increase in Sfx3n in the rat brain after birth, suggesting that Sf3x3 is necessary for neurite outgrowth and synapse formation.

This finding provides a translatable baseline for investigating presumed alterations in Sfx3n toward clarifying the pathogenesis of human neurological and neurodegenerative conditions. 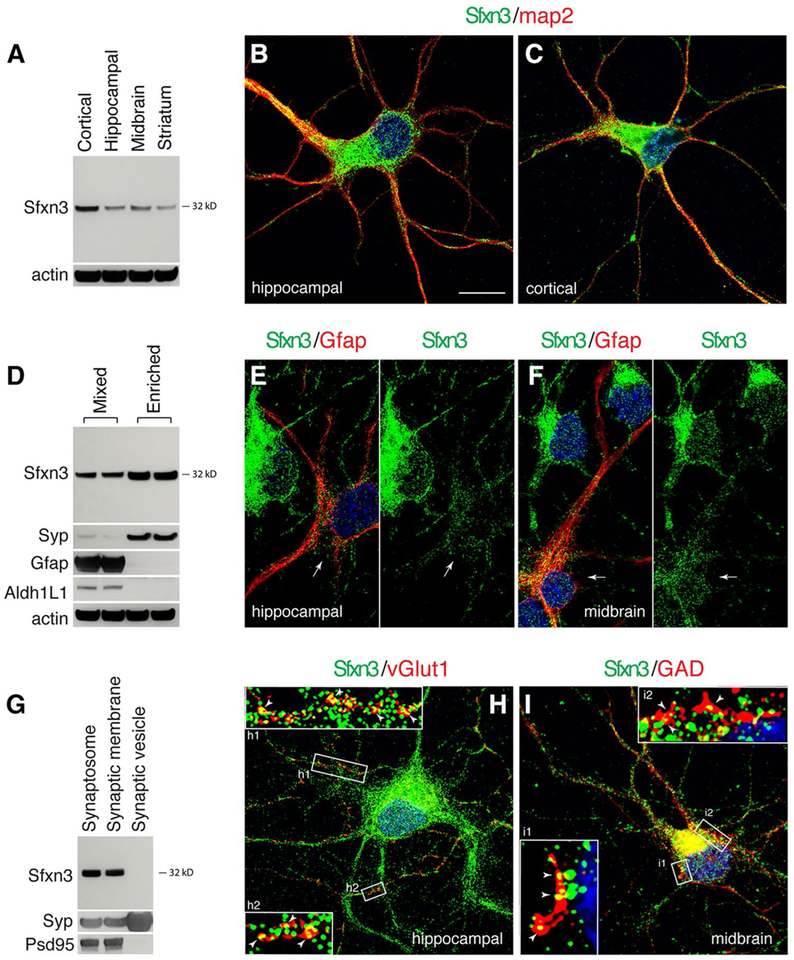 The hypothalamus is essential for homeostasis and energy metabolism. Developmental deficiencies of the hypothalamus can contribute to diseases or disorders of energy imbalance, obesity, and anxiety. However, many important aspects of hypothalamic development remain unaddressed, particularly the progenitors responsible for neurogenesis in the hypothalamus.

In this study, the authors used single-cell RNA sequencing to unravel distinct transcriptional regulation circuits governing the development of distinct cell nuclei within the hypothalamus.

The authors identified several novels and specific markers for hypothalamic precursor cells and increased knowledge of the cellular and molecular mechanisms that underpin the development of the non-laminated mammalian hypothalamus. Another important point relates to the strong developmental conservation of nuclear structures in the hypothalamus and marker gene conservation between mice and humans.

Overall the results show that TTYH1-, FAM107A-, or HMGA2-expressing cells residing in the VZ were positive for SOX2 and P-VIM. The FAM107A+SOX2+ cells exhibited radial fibers extending basally toward the pial surface, suggesting that these cells are hypothalamic radial glial and hypothalamic mantle zone radial glial cells.

Take a look at other studies that have successfully utilized our antibodies.