Interview with a scientist: traffic jams at the nuclear pores

Within our body, hundreds of molecules pass in and out across the cellular membranes, and, similarly to cars, they can get stuck in traffic jams. This nuclear-cytoplasmic trafficking might contribute to neurological disorders. Read more and learn about Dr. Rita Sattler's research.

Have you ever been stuck in traffic on your way to work? Snaking up and down the hill or heading downtown, long lines of steel and tire it’s all you can see. Stressful? Yes, but traffic jams not only increase your stress and frustration, but they can also radically alter the conditions of the surroundings at any given time, causing a cascade of unpleasant and unpredictable events.

Similarly, within our body, hundreds of molecules pass in and out across the cellular membranes. Like cars, they can get stuck in traffic jams, causing congestions that lead to a shock wave of stop-and-go reactions affecting the cellular surroundings.

The nuclear membrane contains nuclear pore complexes, the bilateral gateways connecting the nucleoplasm and cytoplasm that allow transporting material into and out of the cellular nucleus. This transport includes RNA and ribosomal proteins moving from the nucleus to the cytoplasm and proteins (such as DNA polymerase and lamins), carbohydrates, signaling molecules, and lipids moving into the nucleus.

Cell transport is the passage of molecules across the cell membrane, either into or out of the cell.

Sometimes molecules passively move through the phospholipid bilayer like self-driving cars. They also need a protein's assistance, like a channel protein or some other transmembrane protein, to cross the cell membrane.

A cellular transport disease is caused by defects at the nuclear pore complexes resulting in traffic jams at the cellular and nuclear membranes. Cellular congestion is a highly complex problem as there is often no clear single root cause to tackle. Multiple factors contribute. An example of a cellular transport disease is cystinuria, the most common defect known in transporting an amino acid (cysteine) and a significant cause of kidney stones.

These intracellular aggregations of misfolded proteins, such as the nuclear TAR DNA-binding protein of 43 kDa (TDP-43) that accumulates in the cytoplasm, are toxic to the affected neurons and are thought to contribute to neuronal cell death. 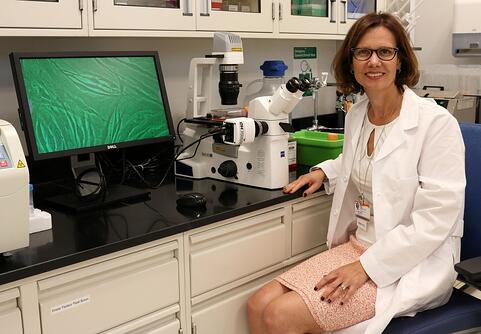 Photo: Dr. Rita Sattler, Co-Director of the ASU-BNI Interdisciplinary Graduate Program in Neuroscience and Director of the BNI Undergraduate and High School Student research programs at the same institute.

We asked her 5 questions about her research scope and scientific challenges.

Q1: In one or two sentences, what is the most critical question you want to address?

We are extremely intrigued by the fact that a spectrum disease exists spanning motor neuron degeneration manifesting in amyotrophic lateral sclerosis (ALS), and early-onset dementia leading to frontotemporal dementia (FTD).

Within this spectrum disease, we aim to understand at both cellular and molecular levels how a genetic mutation in the C9orf72 gene, which is the most common genetic cause of ALS/FTD to date, can lead to motor neuron loss and simultaneous forebrain cortical neuron loss.

Figure 1. Example of ADAR2 immunofluorescent staining with anti-ADAR2 polyclonal antibody (HPA029645) in A-431 cell line. ADAR2 is shown in green, microtubules are shown in red.

Q2: What is innovative about your research?

A few years ago, in a very serendipity-like scenario, we discovered that nucleocytoplasmic trafficking defects play a significant role in C9orf72-mediated neurodegeneration.

In particular, we found that the nucleocytoplasmic mislocalization of the RNA binding protein, adenosine deaminase acting on RNA 2 (ADAR2), which is normally localized exclusively to the nucleus (Fig.1), accumulates in the cytoplasm in patients with ALS/FTD (Fig.2).

While these mechanisms have been known before, little attention was given to their relevance in neurodegenerative disorders.

We have since been focusing on understanding not only the cause of the defects of this critical cellular regulation but, most importantly, the downstream consequences of its dysfunction towards cellular health and survival in C9orf72 ALS/FTD.

Q3: What is the most challenging part of your research?

I think the most challenging part of our research is finding the right disease model. This is because the study of human diseases requires access to human tissue, which is only available in postmortem tissue samples if you are studying a brain disease.

The problem with postmortem tissue samples is that they are static and only allow us to look at fixed time windows of the disease, which is most often the disease's late stage.

To model neurodegeneration and gain information from earlier events before cellular degeneration occurs, we started using patient-derived induced pluripotent stem cells (iPSCs), which we differentiate into neurons and glia.

This approach allows us to perform temporal evaluations of mechanistic and functional studies while still using patient material.

However, we have to keep in mind that we are working in an artificial in vitro setting. Thus, while we co-culture different cell types together in one dish to simulate an actual brain environment, we are still not working in an in-vivo situation, which is the challenging aspect of any in-vitro model. 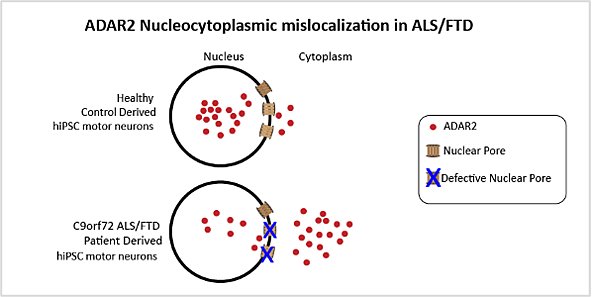 Figure 2. Schematic of ADAR2 Mislocalization in ALS/FTD Patient. Aberrant ADAR2 accumulation in the cytoplasm of a hiPSC-MN from a C9orf72 ALS/FTD patient due to nuclear pores defects. ADAR2 nucleocytoplasmic mislocalization, from the nucleus to the cytoplasm, leads to an aberrant RNA processing in C9orf72 mediated ALS/FTD and represents a molecular hallmark of this neurodegenerative disease. The schematic is designed according to the data from Moore S. et a., 2019.

Q4: Which technology have you found useful to answer your research questions?

We rely heavily on immunohistochemistry (IHC) to examine protein expression with a spatial resolution, both on a cellular level (e.g., nuclear versus cytoplasmic), and on the level of brain region specificity when we study postmortem brain tissue samples.

While we perform RNA analyses (RNA sequencing or RNA FISH) on a routine basis, it is the biology of the protein that often provides us with the ultimate answers to our questions and hypotheses. Preferably, we would like to have both techniques in place simultaneously, which is why we also perform RNA FISH in combination with IHC.

Q5: If you use primary antibodies, could you explain how they have helped you or might help you with your research scope?

We use lots of primary antibodies for our research when doing immunohistochemistry on patient brain tissues and patient-derived iPSC neurons and glial cells.

Through the use of primary antibodies, we uncovered one of the downstream consequences of nucleo-cytoplasmic trafficking defects in C9orf72 ALS/FTD, which is the mislocalization of the RNA editing protein ADAR2.

With this technique, we not only uncovered a novel aspect of disease pathogenesis in C9orf72 ALS/FTD but we were also able to expand on our early findings to provide evidence that ADAR2 mislocalization might regulate the formation of cytoplasmic TDP-43 inclusions, which is a hallmark pathology in almost all ALS/FTD.

The latter has also been recognized as a major pathology in Alzheimer’s disease (AD) and other related dementias. Based on this knowledge, ongoing studies are now using ADAR2 IHC to examine ADAR2 mislocalization in AD and its relationship to toxic cytoplasmic TDP-43 inclusions.

Did you find this blog interesting? Listen to Dr. Sattler's webinar

Atlas Antibodies together with Dr. Rita Sattler and, in collaboration with Nature Research, have recorded a webinar. In this webinar, Dr. Rita Sattler discusses the latest insights into the mechanisms of dysfunctional nuclear-cytoplasmic trafficking of RNA binding proteins and how they might contribute to neurodegeneration in ALS/FTD, and likely other related neurological disorders.