Astrocytomas, oligodendrogliomas, and glioblastomas are all brain cancers called gliomas. Their names refer to the kind of glial cells from which they begin. In the brain, glial cells outnumber neurons with a five-to-one ratio, making gliomas highly invasive and difficult to eradicate.

Historically, gliomas were classified and graded based on cell type, location, patients' survival time, and the correlation of their microscopic appearance with clinical outcomes. More recently, histological characteristics such as cellularity, mitotic activity, pleomorphism, necrosis, and endothelial proliferation have also been considered.

However, that is still not enough. So, what holds the clues to predicting the kind of glioma, its aggressiveness, how it would behave throughout time and in response to treatment?

The international standard for classifying gliomas, and other tumors of the central nervous system (CNS, brain, and spinal cord), is that of the World Health Organization (WHO). The groundwork for the WHO classification goes back to 1925, when Bailey and Cushing published the first classification of gliomas, suggesting that the tumor cellular structure could predict and guide treatment and prognosis (Bailey and Cushing, 1925).

The fifth edition of the WHO CNS classification published in 2021 (WHO CNS5 2021) introduces major changes. It advances the role of molecular diagnostics in gliomas classification in terms of nomenclature and grading, emphasizing the importance of integrated diagnoses and layered reports.

The discoveries of several genetic alterations and aberrant signaling pathways, such as MGMT methylation, IDH1/2 mutations, 1p/19q deletions, aberrant epidermal growth factor receptor, and PI3K pathways, abnormal p53/Rb pathways, and others have made a considerable contribution to our understanding of the genesis and biology of gliomas.

Morphological features combined with specific molecular and genetic alterations (summarized in figure 1) define the molecular pathology in gliomas and are valuable tools for the stratification of patients, molecular diagnostics, and targeted therapies (Masui 2012). 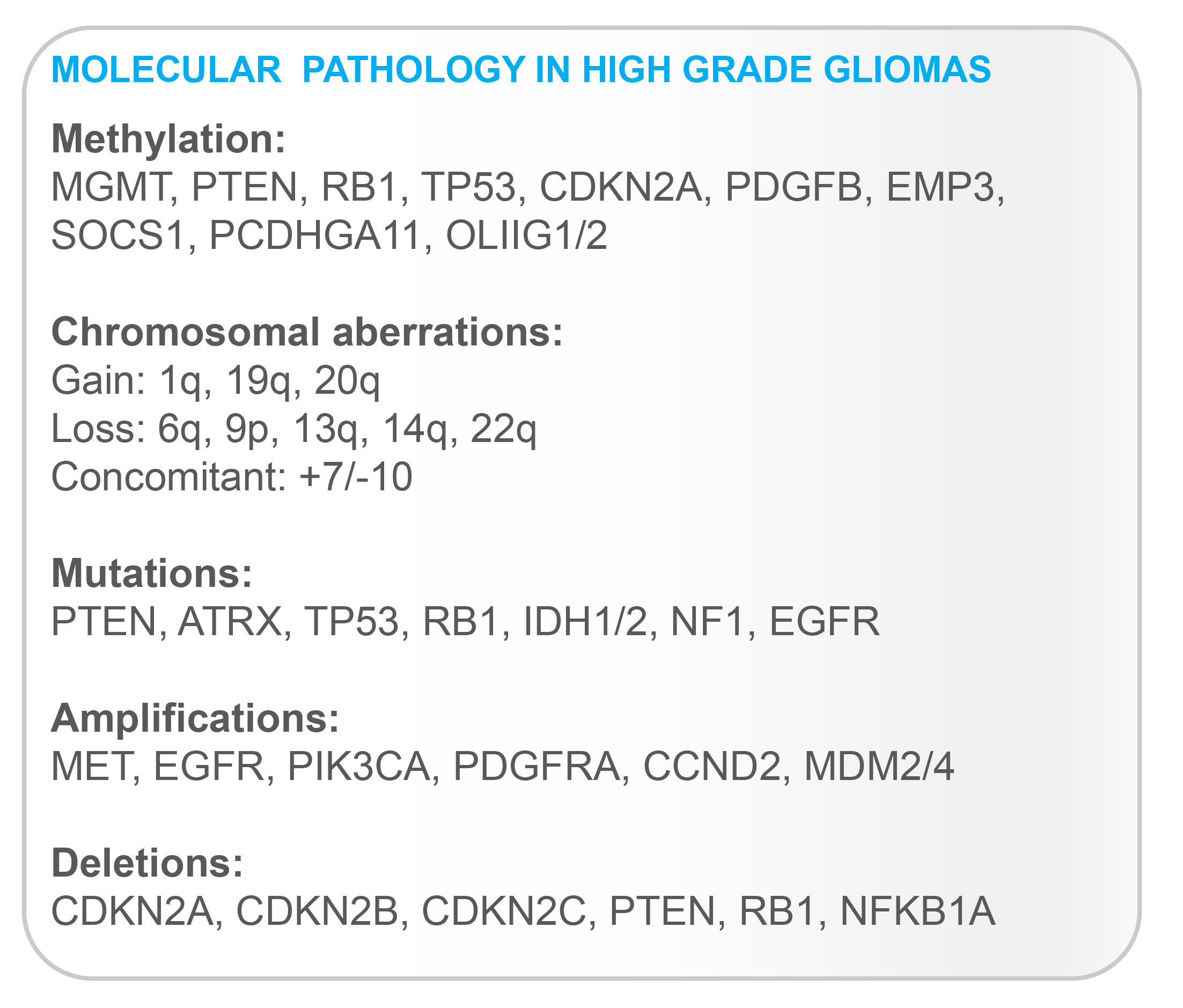 Figure 1. Key molecular alterations in high-grade gliomas. The updated WHO CNS5 2021 emphasizes the molecular markers that characterize gliomas used for classification and grading.

A 7-layers genomic landscape for gliomas

Gliomas are heterogeneous. They change and adapt in response to the composition of their microenvironment and response to therapy. Therefore, the development of molecular classifiers that provide meaningful ways to stratify patients remains a major challenge for the field.

For the first time, molecular features have been explicitly added to the grading schema. For example, an IDH-wildtype astrocytoma with low-grade histologic features can be considered grade 4 (glioblastoma) in the presence of nuclear ATRX, EGFR amplification, TERT promoter mutation, or the combined gain of chromosome 7 and loss of chromosome 10 [+7/-10].

The recommended seven-layers approach for glioma classification is shown in figure 2. This classification based on molecular markers is internally consistent and, in general, correlates well with morphological criteria. 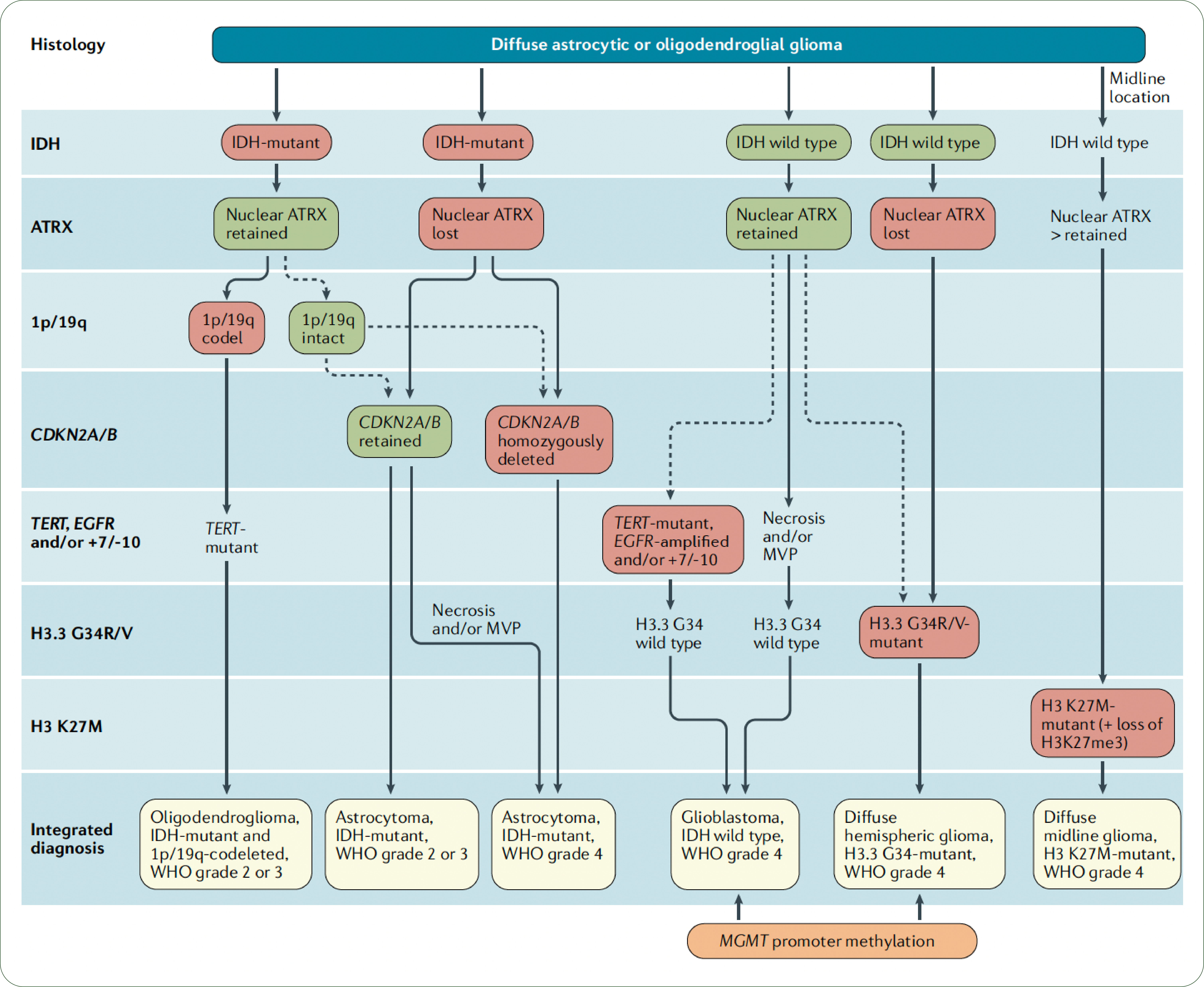 Figure 2. A seven-layers approach for the classification of diffuse gliomas in adults. For an integrated glioma diagnosis, a 7-layers structure combines histological features, grading, and molecular information. The presence and absence of the diagnostically most relevant molecular alterations for each tumor type are highlighted in green and red, respectively. According to the WHO classification, gliomas are classified and graded on a scale of 2–4 with increasing malignancy.

In the last 50 years, immunohistochemistry (IHC) has tremendously revolutionized the field of diagnostic pathology. Histology and IHC have been the conventional approaches for glioma diagnosis, and over the past decade, molecular markers have become increasingly important for diagnosis and outcome prediction. Advances in our understanding of the molecular drivers and signatures of individual gliomas are transforming how they are classified, graded, and treated. The WHO classification of brain tumors relies on histopathological and molecular findings.

In gliomas neuropathology, biopsies are routinely assessed by IHC for diagnostic and prognostic purposes which translate into the analysis of proliferative activity and the expression of oncoproteins and growth factor receptors, which may more accurately reflect the malignant potential of the tumor (Dunbar 2010; Jaiswal 2016).  IHC is routinely used to diagnose astrocytic and oligodendrocytic tumors and assist with diagnosing some less common gliomas with ependymal-like features. Antibodies directed towards proteins such as IDH (isocitrate dehydrogenase), ATRX (alpha thalassemia/mental retardation syndrome X-linked), GFAP (glial fibrillary acidic protein), SYN (synaptophysin), EGFR (epidermal growth factor receptor), p53 (tumor suppressor protein 53), and the proliferation marker Ki-67 (MKI67) are the gold standard and routinely used.

The IHC markers for gliomas can be broadly divided into three categories:

IDH and ATRX: the sentinels for gliomas classification

Immunostaining of ATRX, IDH1, and  GFAP, are used to detect the respective mutations but also to distinguish between different forms of gliomas. Figure  3 shows examples of multiplexed IHC-IF staining of IDH1, ATRX, and GFAP in astrocytoma, oligodendroglioma, and glioblastoma.

IDH1 and ATRX, in particular, can successfully be used to characterize diffuse gliomas into molecularly defined groups in the majority of the cases. For example, IDH1 mutations together with ATRX loss are common in astrocytomas grade 2-4, while they are rare in glioblastoma. IDH1 mutations without ATRX loss characterized oligodendrogliomas. IDH mutations are not present in high-grade gliomas (figure 2). If the loss of nuclear ATRX in an IDH-mutant glioma is diagnostic for astrocytoma, only the combined immunostaining of ATRX and CDKN2A/B allows the distinction of IDH-mutant astrocytomas from IDH-mutant oligodendrogliomas.

GFAP is a classical marker of astrocytoma (figure 3C), both in clinical and experimental settings. GFAP is used to determine glial differentiation, which is associated with a less malignant tumor. This is visible in figure 3: GFAP staining in astrocytoma (3C) is stronger compared to the GFAP staining in glioblastoma (3A). 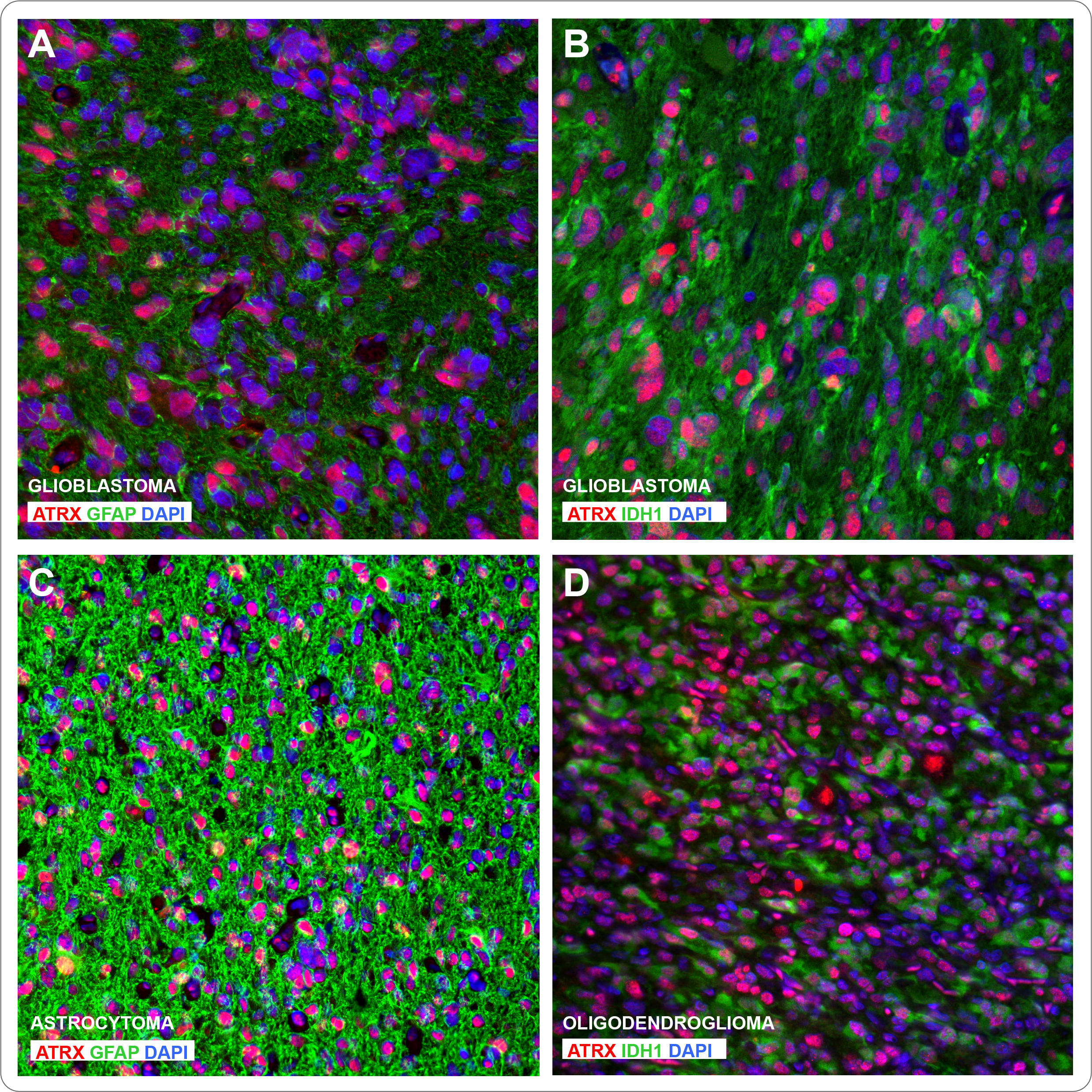 Figure 3. Multiplexed IHC-IF staining of IDH1, ATRX, and GFAP in gliomas' tumor cells. (A) ATRX and GFAP in glioblastoma multiforme. Most low-grades 2,3 gliomas harbor IDH mutations while IDH wild-type gliomas are exemplified in most glioblastoma. ATRX mutations are widely distributed in gliomas. GFAP is a classical marker of astrocytoma.

Bailey P, Cushing H. Microchemical Color Reactions as an Aid to the Identification and Classification of Brain Tumors. Proc Natl Acad Sci U S A. 1925 Jan;11(1):82-4.