Neuroendocrine neoplasms (NENs) constitute a group of tumors that derive from the sensory and secretory neuroendocrine cells of the diffuse endocrine system.

There is an unmet need for accurate biomarkers that can be used for NEN diagnosis, prognosis and follow-up, therapy stratification, and evaluation of treatment response. In this white paper, we highlight our newly released PrecisA Monoclonals useful for the immunohistological profiling of NENs.

Classification of NENs is based on tissue of origin, grade of differentiation, malignant potential and TNM staging. NENs are divided into:

NETs are further graded according to proliferation score (G1-G3), while NECs are all G3 and are further subdivided into large and small cell carcinoma based on the histology.

In this white paper, we use “NEN” to include all tumor types.

NENs consist of a spectrum of heterogeneous tumors affecting neuroendocrine cells (the cells that release hormones into the bloodstream and act as an interface between the endocrine system and the nervous system). Thereby, NENs are either epithelial or neural in origin.

Although NENs may arise almost in every organ, they are predominately found in the gastrointestinal (48%) and bronchopulmonary (25%) systems, followed by pancreas (9%) reflecting the high density of neuroendocrine cells in these organs.

Some specific types of NETs include:

The survival is determined by several parameters, including the localization of the primary tumor, tumor size, presence of vascular invasion, necrosis, metastasis, and grade.

In addition, metastases are found in 20.8% of NENs at presentation and in another 38% after the initial diagnosis (1).

Morphological differentiation characteristics (well- or poorly-differentiated) is at the moment the most important prognostic factor for NENs, along with grade (proliferation degree, G1-G3) and stage (early or advanced).

However, there is a need for sensitive and specific tumor biomarkers, and the interest in molecular and immunohistochemical profiling of NENs is increasing since morphology alone is not sufficient (2).

Most NENs produce and secrete a multitude of proteins (including hormones and amines) that can be detected by immunohistochemistry (IHC).

In case of silent (non-hormone producing) tumors, assessment of transcription factors can be of help for correct diagnosis and classification (3).

Thus, along with the rapid development of next-generation sequencing and imaging techniques, IHC holds the top position as the most routinely used histopathological method in clinical settings to diagnose NENs.

The crucial need of new biomarkers in the management of NENs

NENs management remains a challenge due to a number of aspects such as lack of profound knowledge of the biology of the disease, late clinical presentation, and the scarcity of effective treatment options.

A correct diagnosis is imperative for the patient to obtain the most efficient treatment. The immunohistochemical assessment of the complex biomarkers expression patterns in targeted biopsies is instrumental in all phases of the diagnostic process, such as differentiation (neuroendocrine or epithelial origin) and proliferation (grading and staging) (Table 1).

In fact, the ultimate NEN diagnosis can only be established with tissue biopsy and further tumor grading based on the combination of Ki-67 proliferative index with cell mitotic rate.

Ki67 index and mitotic rate (Fig 1) is the standard routine for measuring NEN proliferation to define the tumor grade (4). In addition, Ki67 has both prognostic and predictive value in NENs. Thus, Ki67 proliferation index >2% is a significant predictor of progression-free survival (5).

Also, selection of systemic therapies is partly based on the Ki67 rate (6,7).

A critical limitation in the management of NENs is posed by the lack of accurate immunohistochemical markers for classification, monitoring of therapy’s efficacy, and providing a prognostic assessment of disease progression.

Most NENs produce and secrete a multitude of proteins that can be detected by IHC (8,9). These include, most importantly, chromogranin A (CgA or CHGA) and synaptophysin (SYP), which are considered the most specific markers of NENs differentiation, SYN being more sensitive and CHGA more specific (10).

In addition, expression of CD56 (cluster of differentiation 56, also known as NCAM1) and neuron-specific enolase (NSE) are adequate evidence of neuroendocrine differentiation (11,12).

Also, CD57 is commonly used as marker for some NENs, namely pheochromocytoma and extra-adrenal paraganglioma and a useful marker for diagnosing Merkel cell carcinoma (13).

These markers, however, offer little help in the determination of NEN’s primary location when this is unknown.

In case of metastasis, employment of IHC stains for transcription factors and hormonal products may be effective in identifying the primary site of tumor origin (14).

Standard laboratory assessment, when diagnosing a NET, relies mostly on CHGA, NSE, SYP, and CD56. However, while virtually all carcinoids are positive for SYP and CHGA, their expression is highly variable in NENs.

The advent of second-generation NEN markers for use in IHC has considerably expanded the pathology toolbox, constituting markers that often retain expression even in poorly differentiated NECs.

From a biological context, the second generation IHC NEN markers (functionally distinct from CHGA and SYP) are more consistent in terms of expression even if the NEN downregulates its secretory machinery as part of the dedifferentiation process.

Second-generation IHC markers for NEN include i.a. ISL1, INSM, SECG, and OTP (figs 2-7). As non-NENs rarely express these antigens, their specificity makes them welcome additions to the clinical practice (15).

ISL1 (or ISLET1) is a transcription factor involved in the differentiation of the neuroendocrine pancreatic cells. It binds the insulin gene promoter and regulates insulin gene expression.

The nuclear transcription factor INSM1 (insulinoma-associated protein 1) is a novel sensitive and specific marker that has recently demonstrated excellent sensitivity and specificity for NETs differentiation in various anatomic sites.

INSM1 is more sensitive than SYP/CHGA in NECs. Thus, 91-95% of small and large cell NECs express INSM1 (19). In addition, nuclear expression pattern of INSM1 offers an advantage in interpretation over first generation markers, which are all cytoplasmic.

INSM1 may be used as a standalone, first-line marker for tumors of the head and neck (20), as well as in primary NENs of the gastrointestinal tract, appendix, and pancreas (21). Thus, it is positive in pancreatic NET, and negative in pancreatic ductal adenocarcinoma (22) and in gynecologic high-grade neuroendocrine carcinomas (23, 24).

Notably, for pulmonary NENs, INSM1 has been proposed as a more sensitive marker than conventional neuroendocrine markers of the first generation (27).

High SCGN expression is found in the cytosol and nuclei of well-differentiated NENs and carcinoid metastases originating from different organs, as well as in NENs from the lung, pancreas, and adrenal glands promoting SCGN as a novel marker of NETs differentiation (28). Moreover, pancreatic endocrine tumors, including gastrinomas, vipomas, carcinoids, and insulinomas, also highly express SCGN (29).

SCGN is more sensitive and specific in large cell neuroendocrine carcinoma than first-generation markers such as CD56, CHGA, and SYN (30).

Orthopedia homeobox protein (OTP) is a nuclear transcription factor with a well-defined role in embryonic neurodevelopment.OTP was suggested as diagnostic and prognostic marker for pulmonary NENs, being strongly expressed in NET cells (typical and atypical carcinoid) but not in NECs (LCNEC and SCLC) of the normal bronchus/bronchiole or any other normal tissues, except for hypothalamus (31-33).

OTP was shown to be twice as sensitive as TTF-1 in detecting pulmonary carcinoid tumors (34).

In summary, first-generation markers such as CHGA and SYP are still considered the gold standard in endocrine pathology. However, the combined IHC analysis utilising second-generation markers may constitute additional sensitive and specific clinical use panels. This appears to be a promising approach for identifying tumors with NEN differentiation and a potential tool for NEN diagnosis (Table 2 and Fig.7).

The combination of classical and new IHC markers should thus be part of the clinical routine arsenal to improve the diagnostic capability, as well as aid in therapy stratification and clinical follow-up. 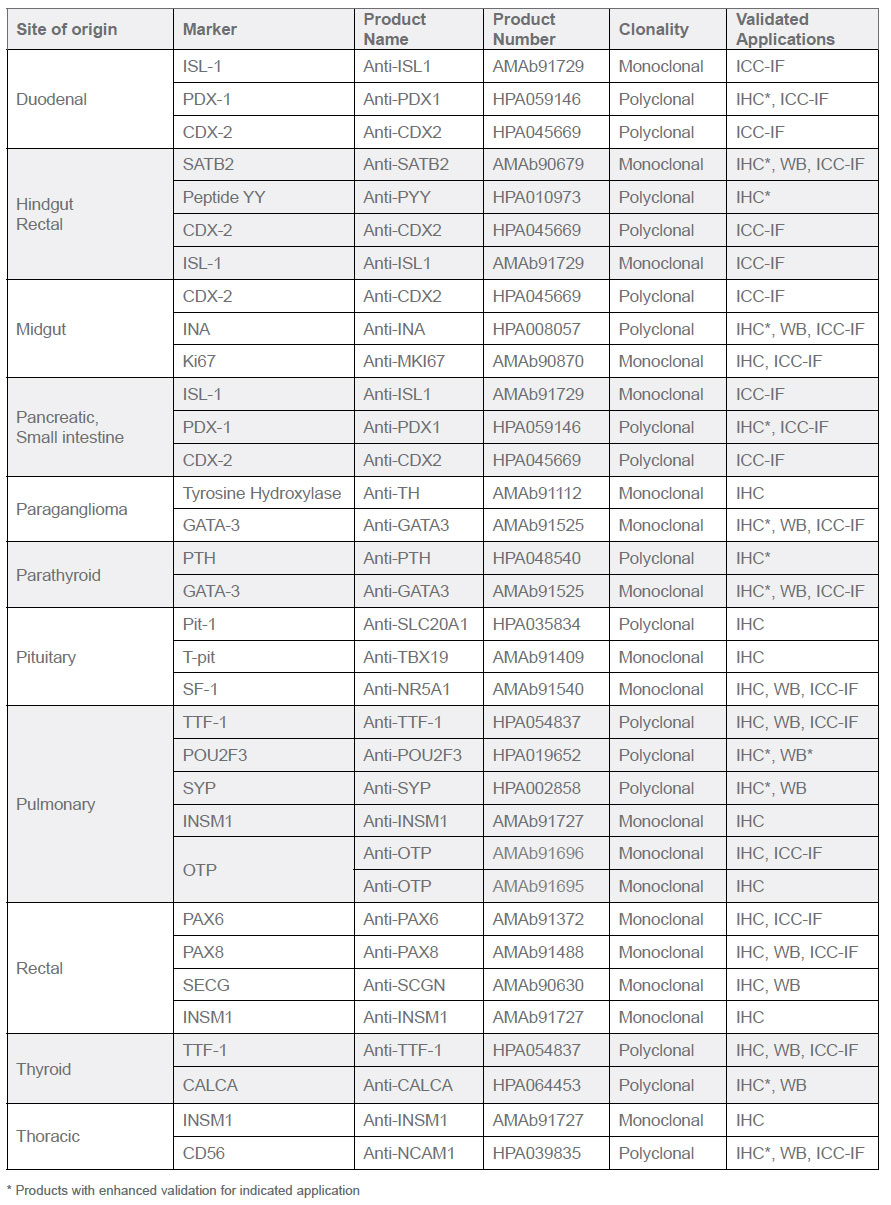 20. Rooper L, et al. (2018) INSM1 is a sensitive and specific marker of neuroendocrine differentiation in head and neck tumors. The American Journal of Surgical Pathology; 42(5):665-671

21. McHugh KE, et al. (2020) INSM1 is a highly specific marker of neuroendocrine differentiation in primary neoplasms of the gastrointestinal tract, appendix, and pancreas: an immunohistochemical study of 179 cases. American Journal of Clinical Pathol. 153(6):811–820,