The data presented here demonstrates how the Triple A Polyclonals and PrecisA Monoclonals can be used for detection of protein-protein interactions in human tissues in situ using a powerful PLA technique. Studies based on such data can further contribute to our understanding of protein functions in normal and pathological states.

Detection of protein-protein interactions by in situ PLA with PrecisA Monoclonals and Triple A Polyclonals.

Proteins are complex biological molecules essential for cellular structure and functions. The majority of proteins commonly interact with various molecules, including other proteins, in order to exert their functions. These protein-protein interactions are involved in a wide range of cellular processes, including e.g. protein modifications, transport, signaling and cell cycling.

Studies of protein interactions are critical for the characterization of protein functions in the context of cell biology in both normal state and disease. A number of techniques for assessing the protein interactions are available, such as co-immunoprecipitation, pull-down assay, crosslinking and far-Western blot analysis. Although these techniques provide powerful tools for studying interactions of the proteins, they lack the subcellular resolution possible with microscopy-based analysis of native tissues or cells.

A proximity ligation assay (PLA) (Duolink®, Sigma-Aldrich) is a technique which allows for studying protein-protein interactions in tissues or cells in situ (is PLA)1. This method can be used for detection, visualization and quantification of protein-protein interactions, as well as for detection of individual proteins and protein modifications in cells or tissue sections.

More than 18000 polyclonal (Triple A Polyclonals) and 270 monoclonal (PrecisA Monoclonals) antibodies are available in the catalogue, together targeting more than 75% of the human protein cod- ing genes. Both the Triple A Polyclonals and PrecisA Monoclonals are developed using carefully designed antigens. The highest levels of specificity, reproducibility and versatility are achieved by a unique antibody purification process using therecombinant antigen as affinity ligand for the Triple A Polyclonals. PrecisA Monoclonals are purified on protein A columns. Importantly, the antibody specificity is vali- dated by an extensive IHC analysis in 44 normal and 20 cancerous human tissues. As mentioned above, the main advantages of is PLA in comparison to other techniques is the possibility to detect protein-protein interactions with subcellular resolution in native tissue sections or cells using microscopy. This can be particularly important in e.g. cancer research, including disease diagnostics, patient stratification and biomarker studies2.

Careful consideration of the fixation protocol is necessary to ensure the optimal preservation of morphology of the specimen and the target antigen. Formalin-fixed paraffin embedded tissue (FFPE) sections usually provide an optimal preservation of tissue morphology. Importantly, all antibodies in Atlas Antibodies catalogue are validated and approved for use in human (and in some cases rodent) FFPE samples following heat-induced epitope retrieval.

Is PLA3 is based on the use of oligonucleotide-labelled antibodies (PLA probes), which generate a signal only when the two probes are in a very close proximity (about 30 nm). One of the DNA probes in the created DNA circle serves then as a primer for the rolling circle amplification (RCA) (Fig. 1 A, B). By adding a DNA polymerase, a long DNA product is formed and remains attached to the PLA probe (Fig. 1 C). After finalizing the RCA, the concatemeric repetitions of the same sequence enable hybridization of multiple detection oligonucleotides (Fig. 1 D). The signal from each detected pair of PLA probes is an individual fluorescent spot which can be visualized under a microscope and quantified. The PLA signals (blobs, spots) can be assigned to a specific subcellular location and quantified using image analysis software, e.g. BlobFinder4.

Figure 1: Schematic drawing of PLA reaction. Following incubation with primary antibodies, incubate with PLA probes PLUS and MINUS (A). Hybridize connector oligos and use ligase to complete the DNA circle (B). Roling circle amplification (C). Hybridize fluorescence-labeled oligonucleotides for signal detection (D).

is PLA – a Short Protocol

Below, we provide three examples for detection of protein-protein interactions in FFPE human tissue sections by is PLA with PrecisA Monoclonals and Triple A Polyclonals.

Emerin-lamins interactions in the nuclear membrane

The nuclear envelope delineates nucleus from cytoplasm, preserves the structural integrity of the nucleus and controls molecular passage between nucleus and cytoplasm5. Emerin (EMD) is an inner nuclear membrane protein, involved in both mechanical integrity of the nucleus and tissue-specific gene regulation6. The nuclear lamins are major components of the nuclear lamina underlying the inner nuclear membrane. They act as a bridge between the inner nuclear membrane and chromatin7 providing mechanical support to the nuclear envelope, maintaining proper chromatin organization and transcriptional regulation8. Interactions between emerin and lamins are important for maintenance of nuclear integrity9. Mutations in emerin and lamin genes produce pathologies known as ‘nuclear envelopathies’10. 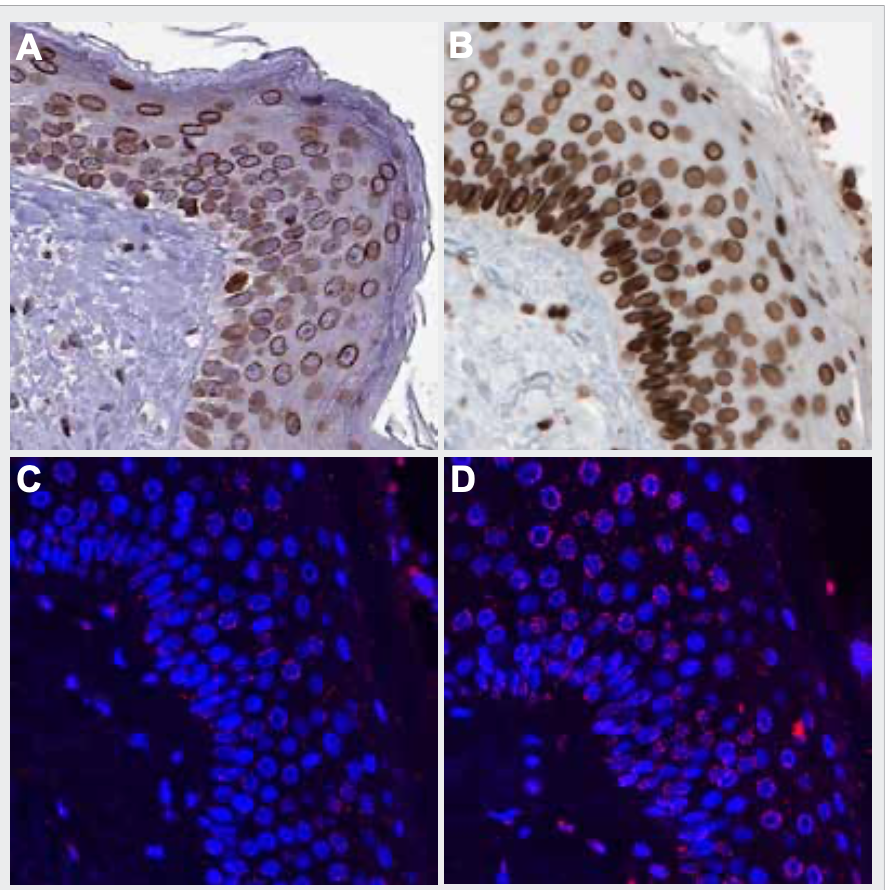 Epithelial cells serve as permeability barriers, sepa-rating underlying cells from the environment. This function requires that the cells are tightly connected to each other. E-cadherin (CDH1), a transmembrane protein forming complex with beta-catenin (CTNNB1), plays a key role in cellular adhesion in the epithelial cells. The loss of catenin from the cadherin-mediated cell-cell contacts is an important factor in the epithelial-mesenchymal transition (EMT) process11,12. The EMT process has been proposed as an important event in the metastatic spread of tumour cells, where epithelial tumour cells acquire a more motile and invasive phe- notype and disseminate from the primary tumour13. Here, the Anti-CDH1 monoclonal antibody AMAb90865 (1:1000) and the Anti-CTNNB1 poly- clonal antibody HPA029159 (1:600) were used to visualize the CDH1-CTNNB1 interaction in the mem- brane of normal epithelial tissues, including prostate (Fig. 3 A) fallopian tube (Fig. 3 B) and colon (Fig. 3 C). Note strong membranous positivity in the epithelial cells (Fig. 3 A-C) and the absence of PLA signal in the lymphoid tissue of tonsil (negative control, Fig. 3 D). Nuclei are counterstained with DAPI. 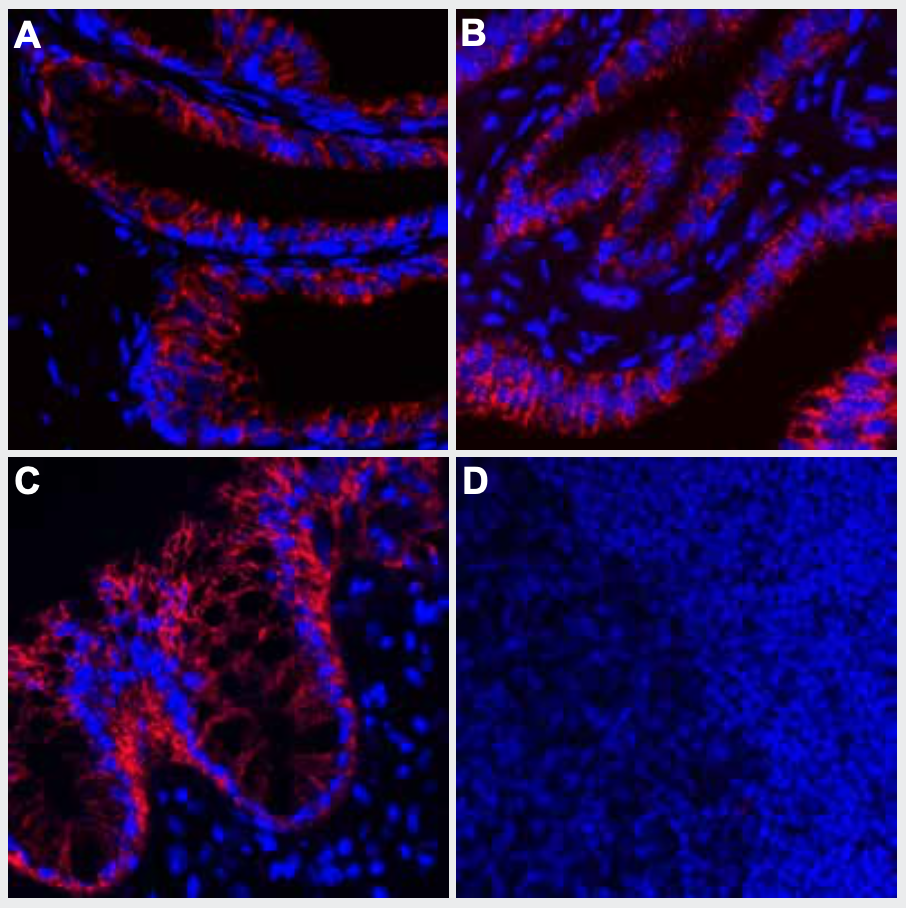 Figure 3: Immunofluorescence is PLA signal shows protein-protein interactions between CDH1 and CTNNB1 in the membranes of the epithelial cells in prostate (A), fallopian tube (B) and rectum (C). Tonsil was used as negative control (D).

Podocalyxin-like – ezrin interaction in the membranes of renal glomeruli

Cellular plasma membrane contains numerous types of proteins, involved e.g. in maintenance of the cell structure, transmembrane transport and signal transduction. Podocalyxin-like protein (PODXL) is a trans- membrane sialomucin protein with anti-adhesive properties. In normal kidney, PODXL function is to maintain an open filtration pathway between neighbouring foot processes in the podocyte. PODXL was also shown to play a role in cancer development and aggressiveness14-17, at least partly through its interaction with the actin-binding protein ezrin (EZR)18,19. Both PODXL and EZR are expressed in the normal renal glomeruli membranes, as well as in the ciliated epithelium of fallopian tube. Here, we show the in- teraction of these proteins by is PLA, using the Anti- PODXL monoclonal antibody AMAb90644 (1:5000) and the Anti-EZR polyclonal antibody HPA021616 (1:2500). Note a strong PLA signal in renal glomerular membrane (Fig. 4 A, B), as well as in the apical mem- branes of the epithelial cells in fallopian tube (Fig. 4 C). Liver was used as negative control (Fig. 4 D). Nuclei are counterstained with DAPI. 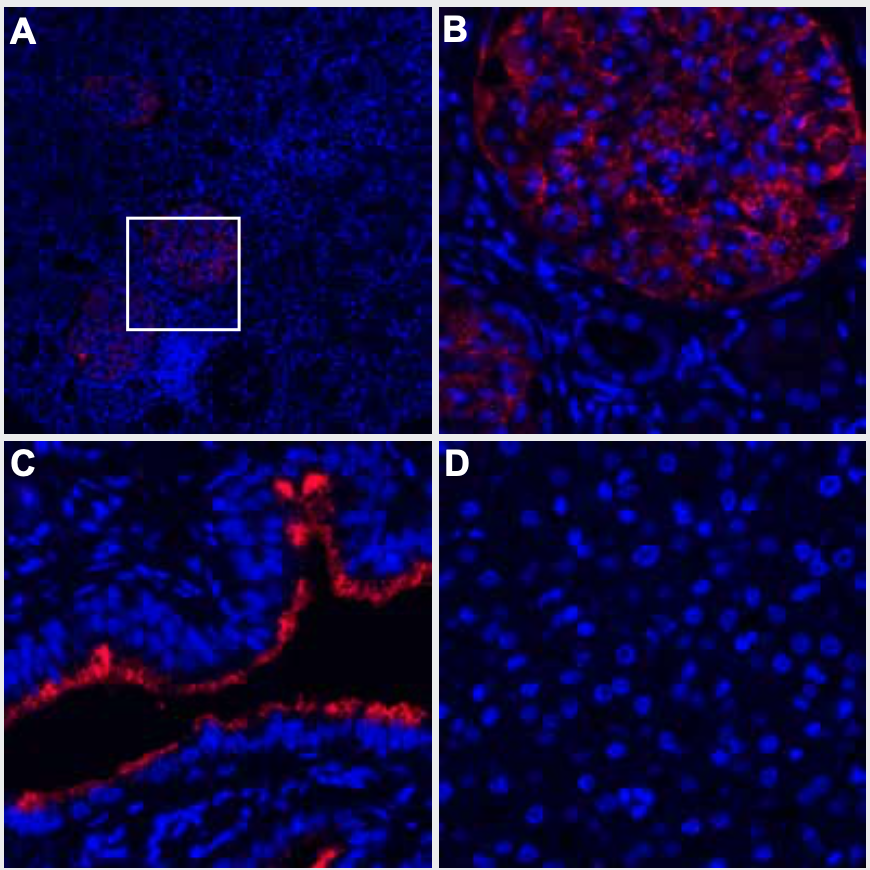 Figure 4: Immunofluorescence PLA signal shows protein-protein interactions between PODXL and EZR in the membranes of renal glomeruli (A and B), as well as in the ciliated epithelium of the fallopian tube (C). Note the absence of PLA signal in renal tubules (A, B), as well as in the underlying connective tissue in the fallopian tube (C). Liver was used as negative control (D).