Validation of antibodies is an experimental confirmation that an antibody is suitable for its intended use. It is important to understand that antibody validation is application- and context specific. Atlas Antibodies provides highly characterized antibodies further strengthened by enhanced validation, as recommended by leading researchers and described in this paper. 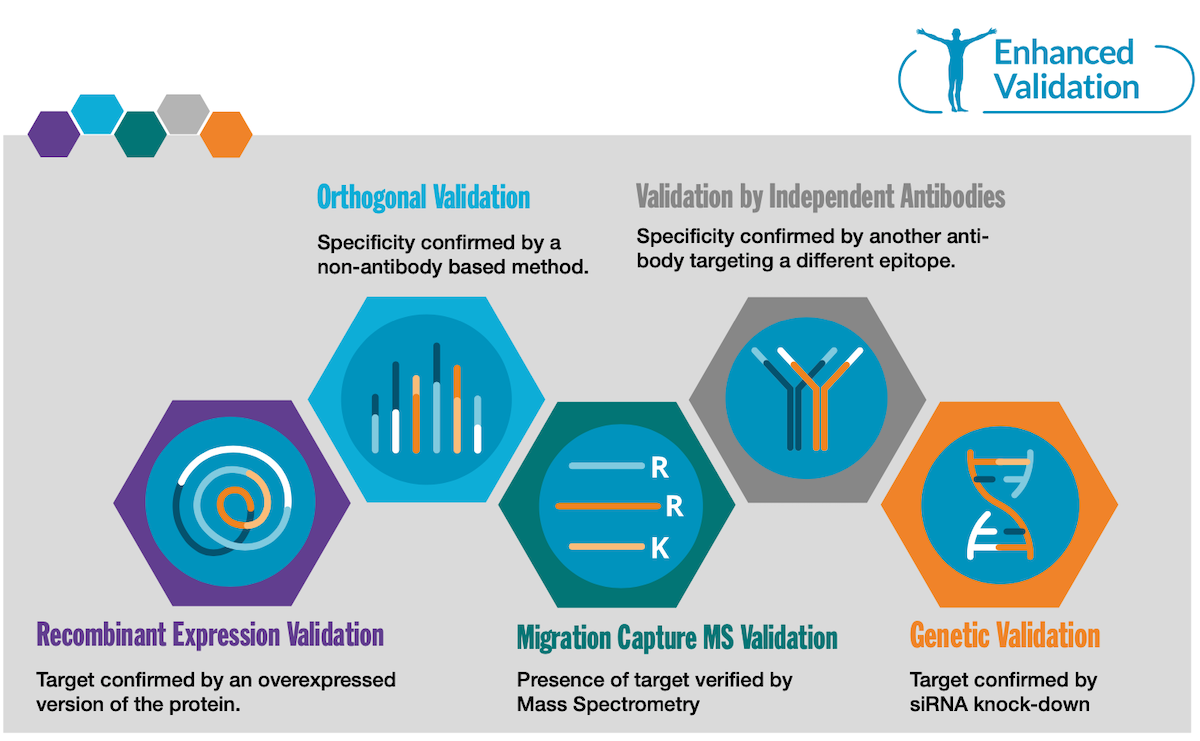 Triple A Polyclonals are originally devel- oped within the academic Human Protein Atlas (HPA) project (proteinatlas.org). HPA uses the antibodies to characterize all hu- man proteins in the majority of normal and cancerous tissues, as well as on a subcel- lular level. The uniqueness and specific- ity of the antibodies used, originate from a thorough selection of antigen regions, affinity purification of the polyclonal anti- bodies, a stringent selection of approved antibodies and validation using different methods.

Precise epitope information is supplied for PrecisA Monoclonals (where available). • Our scientific support team will be happy to share anything you may like to know about production and quality control of each antibody.

To further strenghten the reliability of our antibodies we apply enhanced valida- tion, based on the recommendations by the International Working Group for Anti- body Validation (IWGAV), as published in Nature Methods, Uhlén et al1. The group consists of researchers from institutions in USA and Canada, such as Stanford University, Yale University, MIT, UCSD, University of Toronto, NIH, EMBL, Niigata University in Japan and the Science for Life laboratory in Sweden.

In the article, five conceptual pillars for antibody validation are suggested to be used in an application specific manner. Based on these pillars, HPA and Atlas Antibodies have developed an Enhanced Validation Strategy, resulting in the follow- ing five methods:

At least one of the methods must be used for an antibody to receive Enhanced Vali- dation Status in a specific application.

The target protein can be down-regulated on a genetic level using siRNA or CRISPR-Cas9. If knock-down (by siRNA) or knock-out ( by CRIS- PR) of the corresponding gene correlates with absence or decrease of antibody signal, the antibody is shown to be specific for its target. This is exemplified in Figure 1 where the Anti-PPIB antibody AMAb91245 is used in Western Blot (WB) analysis in U-251 cells. The antibody signal is down regulated in the cells silenced by PPIB siRNA. 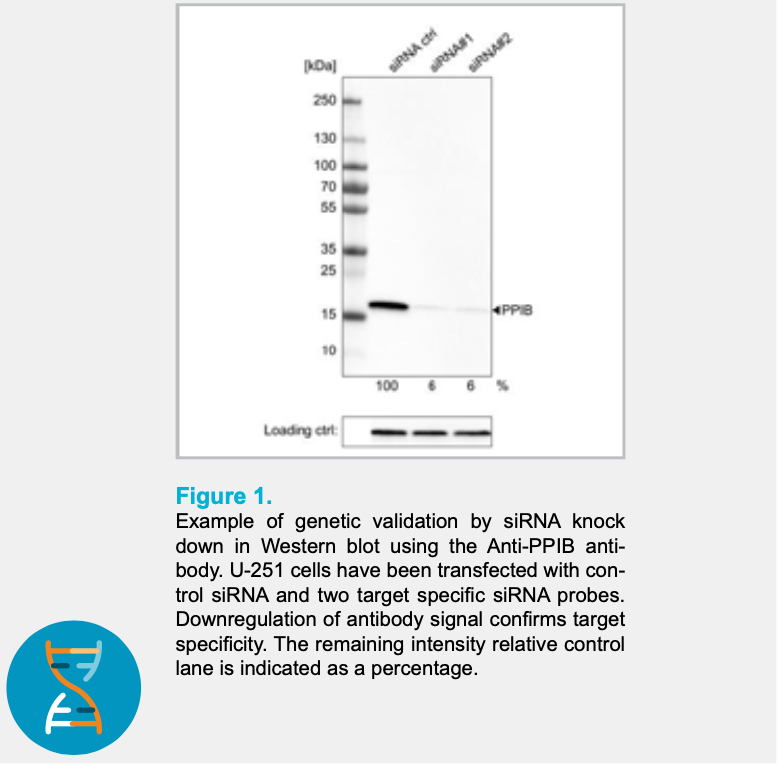 By using a non-antibody based method for target quantification, the antibody signal can be validated by comparing the results from the different methods across multiple samples.

One approach is to compare the antibody staining intensities over multiple samples with varying expression of the target gene, with RNA-seq data in the same samples. This is illustrated in Figure 2, using WB analysis in human cell lines SK-MEL-30 and Caco-2 using Anti-RA- B27A antibody HPA001333. Corresponding RAB27A RNA-seq data (TPM values) are presented for the same cell lines. 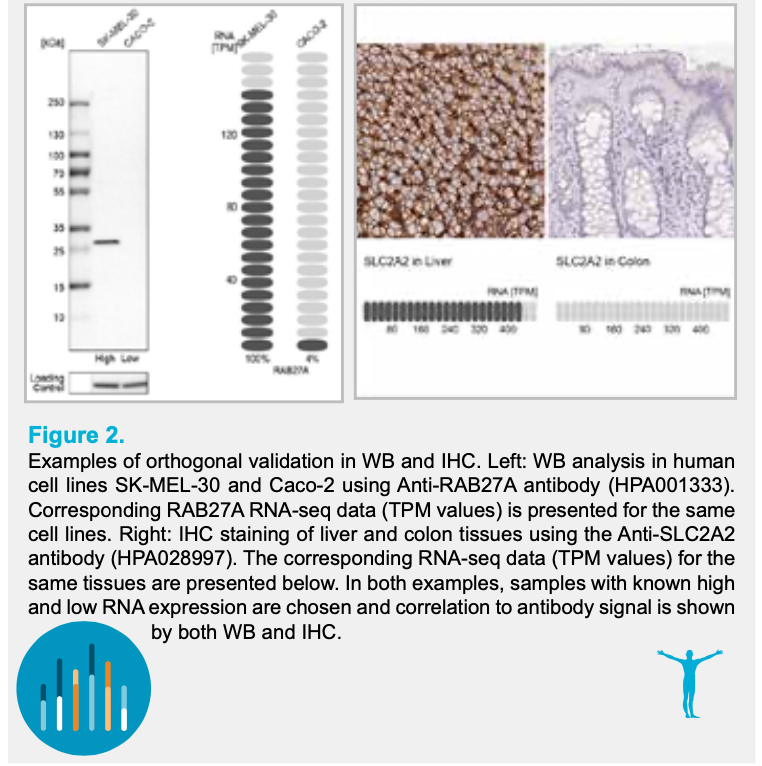 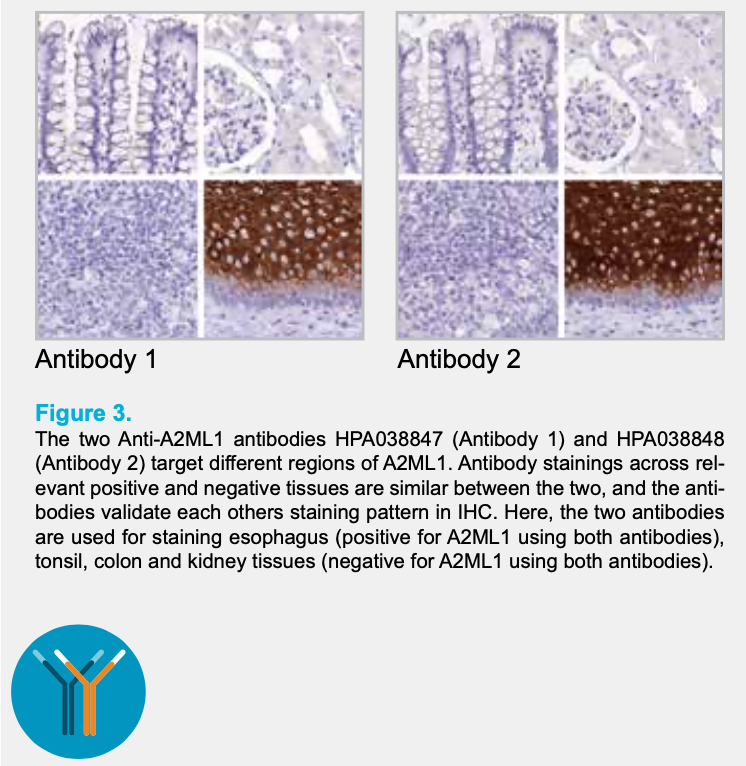 The target protein may also be tagged by an affinity tag or a fluorescent protein. The pattern displayed by the tagged target protein is matched to the antibody signal.

A match confirms that the antibody recognizes its target protein. Validation by tagged proteins can be applied in
immunocytochemistry-immunofluorescence (ICC-IF) and is shown in Figure 4b. 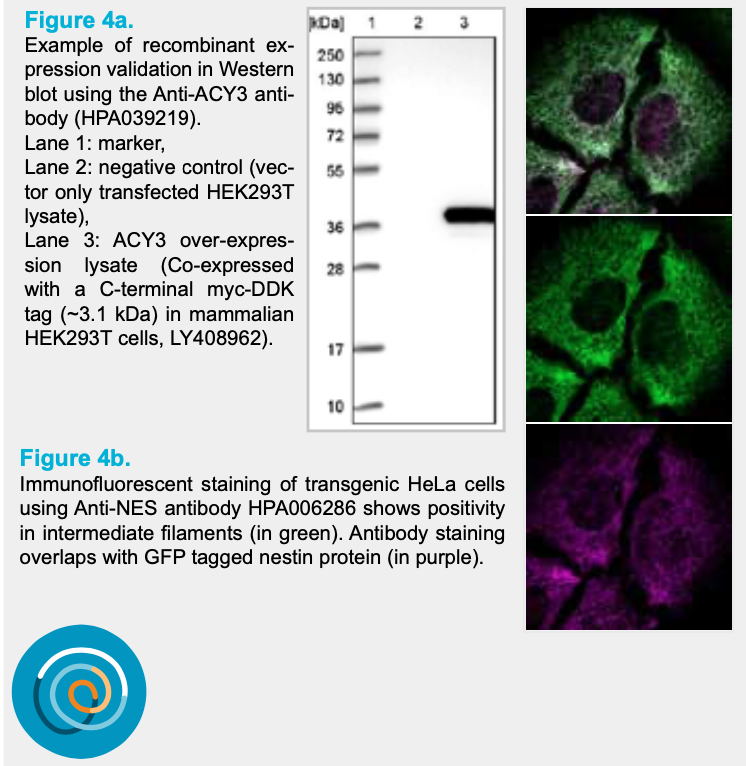 In this method, the staining pattern and the protein size detected by the antibody is compared with results obtained by a capture Mass Spectrometry (MS) method. The band generated by the antibody in WB should correlate with the target protein identified by MS in terms of gel migration. 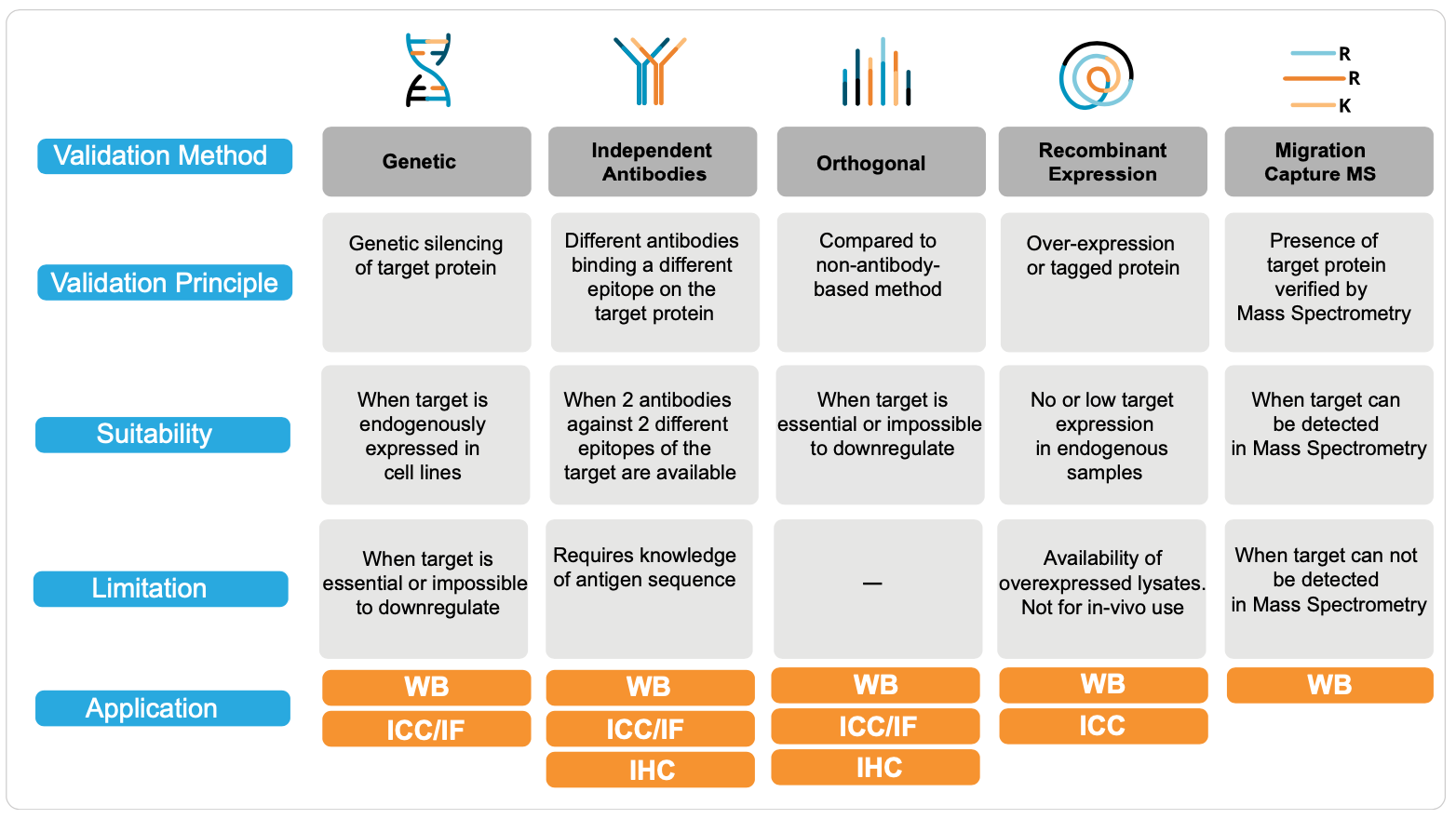