The centrosome is the organelle that acts as the primary microtubule-organizing center of the cell. The centrosome includes the centrioles (the structures that enable the formation of spindle fibers) along with a dense mass of protein called the peri-centriolar material, now known as centriolar satellites.

The term “centriolar satellites” was coined in the second half of the 20th century to name the 70–100 nm electron-dense particles in diameter surrounding the centrosome. Centriolar satellites contain several centrosomal proteins and are the core structural elements of centrosomes and cilia. 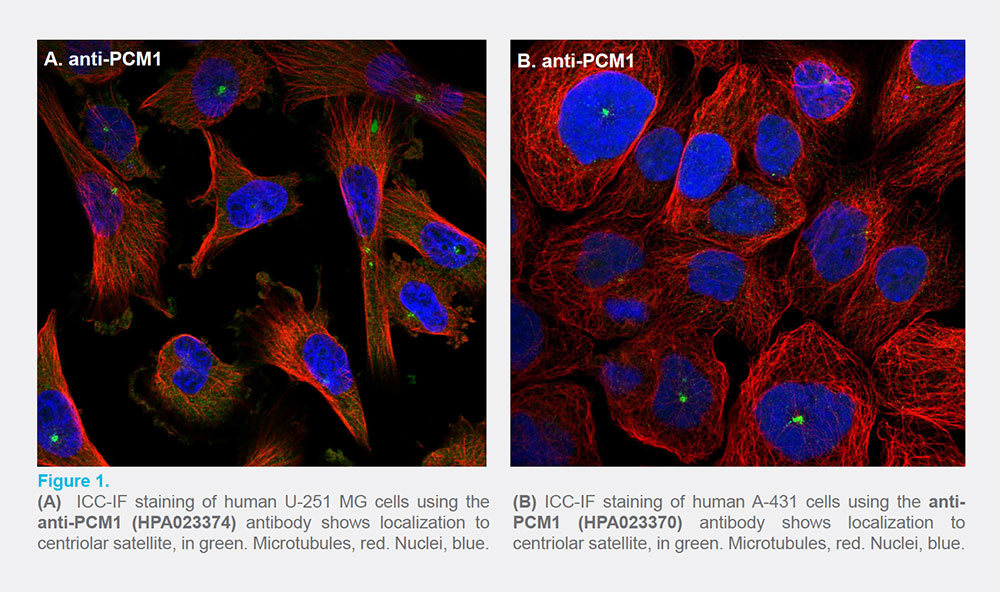 Proteomics and systematic genome-wide analysis suggest that the human centrosome comprises hundreds of different components. According to the Subcellular section of the Human Protein Atlas (HPA) project, three percent of all protein-coding human genes (564 genes) encode proteins that localize to the centrosome or the centriolar satellites (proteinatlas.org).

Centriolar satellites, ubiquitous in vertebrate cells, are small, cytoplasmic membrane-less spherical granules that localize and move around the centrosomes and cilia. Centriolar satellites can also move along microtubules with the help of motor proteins. Thus, they function as vehicles for protein transport towards and away from the centrosome. However, they are mostly only detectable in interphase cells and undergo dissolution during mitosis (Kubo 2003).

Satellites have been implicated in multiple critical cellular functions, including centriole duplication, centrosome maturation, and ciliogenesis; however, their precise composition and assembly properties still need to be explored (Kubo 1999; Hori 2017). 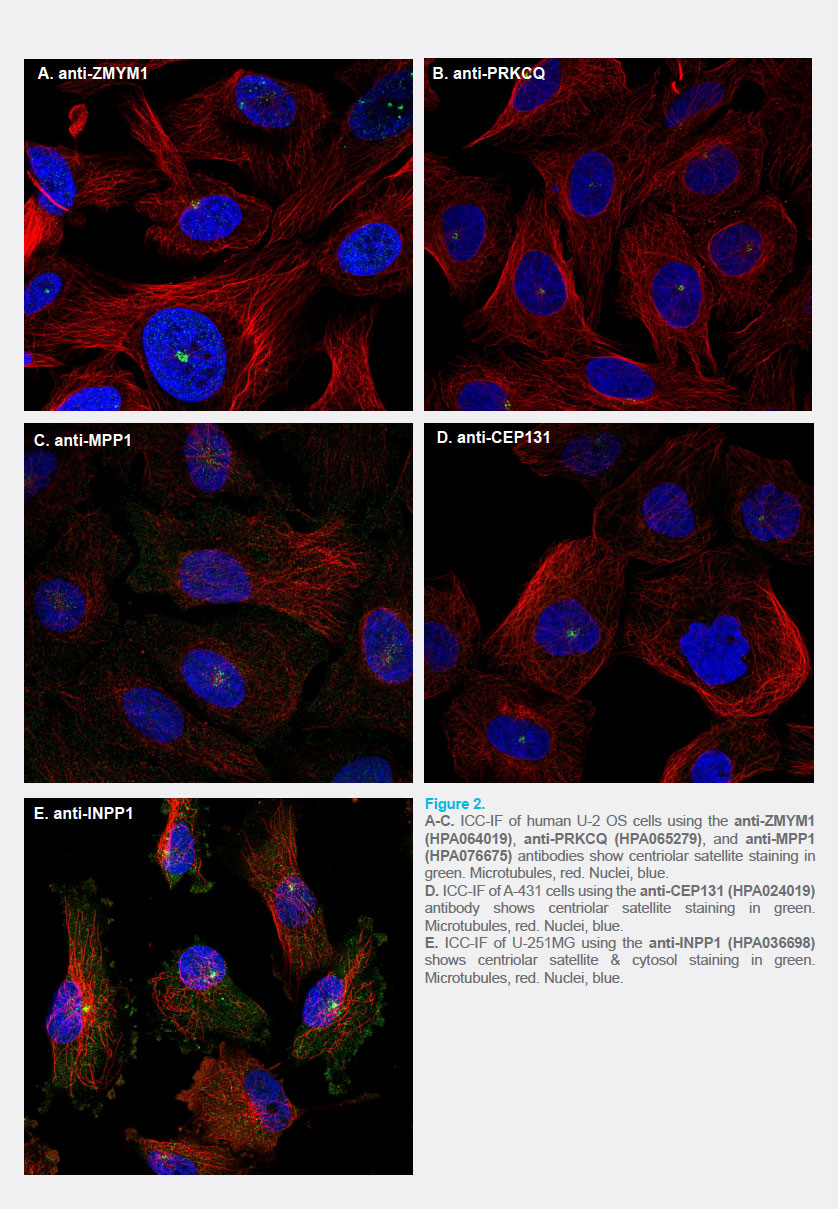 As a result, centriolar satellites are often referred to as the “third component” of the vertebrate centrosome/cilium complex and as a member of the emerging class of membrane-less organelles.

Only about 50% of the centrosome proteome overlaps with the satellite proteome, challenging the current classification of proteins into “centrosome” or “satellite” categories.

Supporting this view, data show that satellite proteins composition is mainly unaffected by centriole depletion; most proteins of the centriolar satellites are present in cells that lack centrioles, meaning that satellite assembly is centrosome-independent.

Centriolar satellites are detectable in almost all mammalian cell types. Their cellular distribution ranges from clustering at the centrosomes, the nucleus or basal bodies, to scattered throughout the cytoplasm, depending on the cell types and tissues.

However, their size, molecular composition, abundance, and localization can vary considerably so, type and tissue-specific functions remain primarily unexplored. 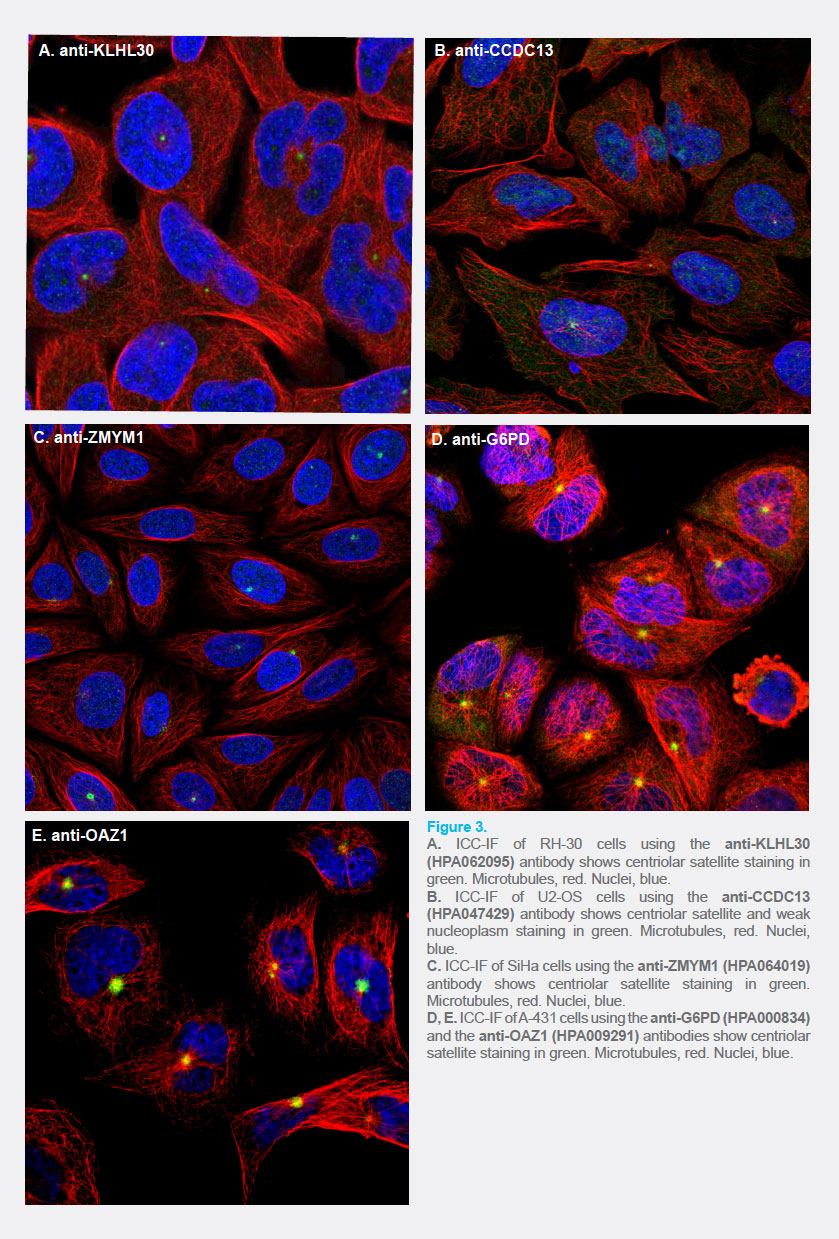 A complete picture regarding the full set of satellite components and the spatiotemporal constitution of centriolar satellites has not yet been established because the number of proteins identified as satellite components has continued to increase over the last several years. They were reported to be 11 in 2011 (Bärenz 2011) and over 100 according to the most recent studies (Gupta 2015).

The analysis of the satellite interactome, combined with subdiffraction imaging, reveals the existence of multiple unique microscopically resolvable satellite populations that display distinct protein interaction profiles, paving the way for future studies aimed at better understanding the biogenesis and functions of these enigmatic structures (Gheiratmand 2019).

Atlas Antibodies offers numerous markers targeting centriolar satellites proteins, some of which are highlighted in this white paper.

PCM1 serves as a scaffold protein and recruits centrosomal proteins to centriolar satellites (Hames 2005). It is essential to correctly position proteins such as CEP250, CETN3, PCNT, and NEK2 and anchoring microtubules to the centrosome.

Therefore, the evaluation of new proteins as components of centriolar satellites is formally made according to two criteria: the first is colocalisation and physical interaction with PCM1, and the second is delocalisation from pericentrosomal locations upon PCM1 depletion (Lopes 2011).

PCM1 accumulates at the nuclear surface of differentiated, non-cycling myocytes. Research studies have demonstrated that antibodies against PCM1 specifically label cardiomyocyte nuclei, and as such, PCM1 has been used by several independent groups to identify cardiomyocytes both in human and rodents (Bergmann 2009, 2012; Hirai 2016; Preissl 2015).

Scientists examine mice deficient in centriolar satellite formation and the relationship with the organelle. In addition, they are looking at cell lines from patients with protein aggregation disorders to see if there are effects on the composition and function of the centriolar satellite. 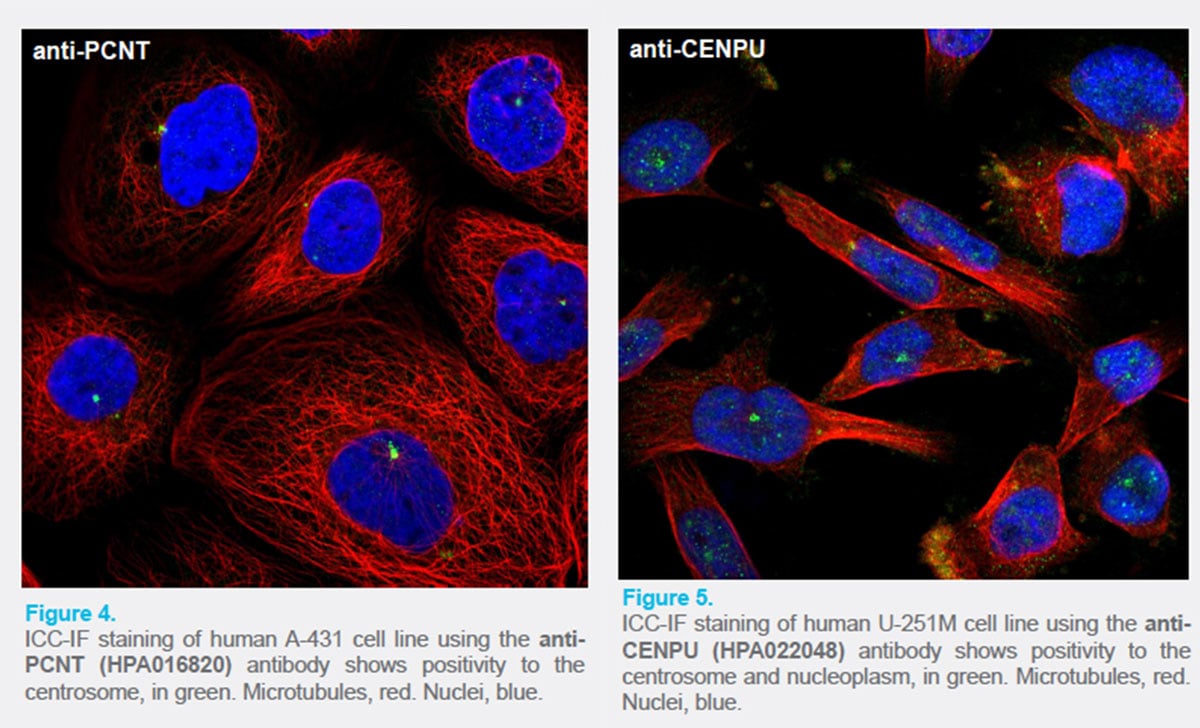 There are dozens of publications reporting the involvement of centriolar satellite proteins in diverse kinds of diseases. Table 1. summarizes some examples.

Centriolar satellites play pivotal roles in centrosome assembly and primary cilium formation through the delivery of centriolar/centrosomal components from the cytoplasm to the centrosome.

They found that cells lacking satellites could still form full-length cilia, although at significantly lower numbers, with changes in the centrosomal and cellular levels of key ciliogenesis factors. Surprisingly, other functions of satellites, namely proliferation, cell cycle progression, and centriole duplication, were unaffected in these cells.

Moreover, LATS2 is downregulated in gliomas and exhibits a negative correlation with the prognosis of glioma: over-expression of LATS2 inhibited glioma cell proliferation and migration/invasion, while LATS2 downregulation promoted them (Shi 2019). Furthermore, data from a genome-wide array-based comparative genomic hybridization analysis show that LATS2 can act as a tumor suppressor gene for malignant mesothelioma (an aggressive neoplasm associated with asbestos exposure) (Murakami 2011).

Chromosomal aberrations involving the PCM1 gene are associated with papillary thyroid carcinomas and a variety of hematological malignancies, including atypical chronic myeloid leukemia and T-cell lymphoma. For example, PCM1 had a significantly lower expression in primary ovarian carcinoma than controls promoting PCM1 as a potential tumor suppressor (Pils 2005). 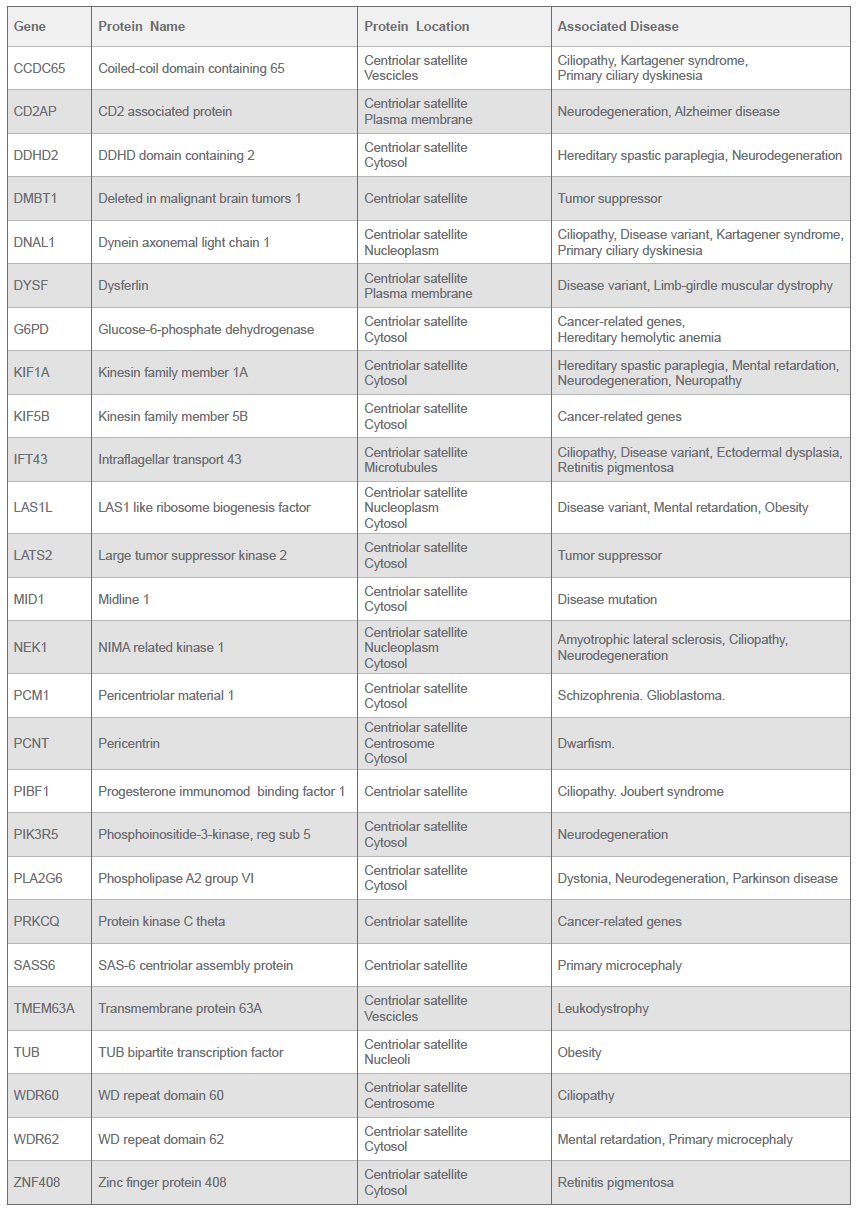 Due to its cerebrovascular role, the centriolar satellite CD2-associated protein (CD2AP) is a leading genetic risk factor for Alzheimer’s disease (Liao 2015; Furusawa 2019). Furthermore, the role of CD2AP in maintaining the blood-brain barrier integrity was reported by Cochran et al. (2015), using the anti-CD2AP polyclonal antibody (HPA003326).

A more recent study emphasizes the role of PCM1 in the postnatal brain. Using the anti-PCM1 polyclonal antibody HPA023370, Monroe et al. (2020) support a contributory role for PCM1 in some individuals diagnosed with schizophrenia.

PLA2G6 is involved in parkinsonism-induced dystonia and neurodegeneration (Karkheiran 2015). In addition, PLA2G6 has also been certified as a causative gene in patients with autosomal recessive early-onset Parkinson’s disease (Paisán-Ruiz 2010, Shen 2019). 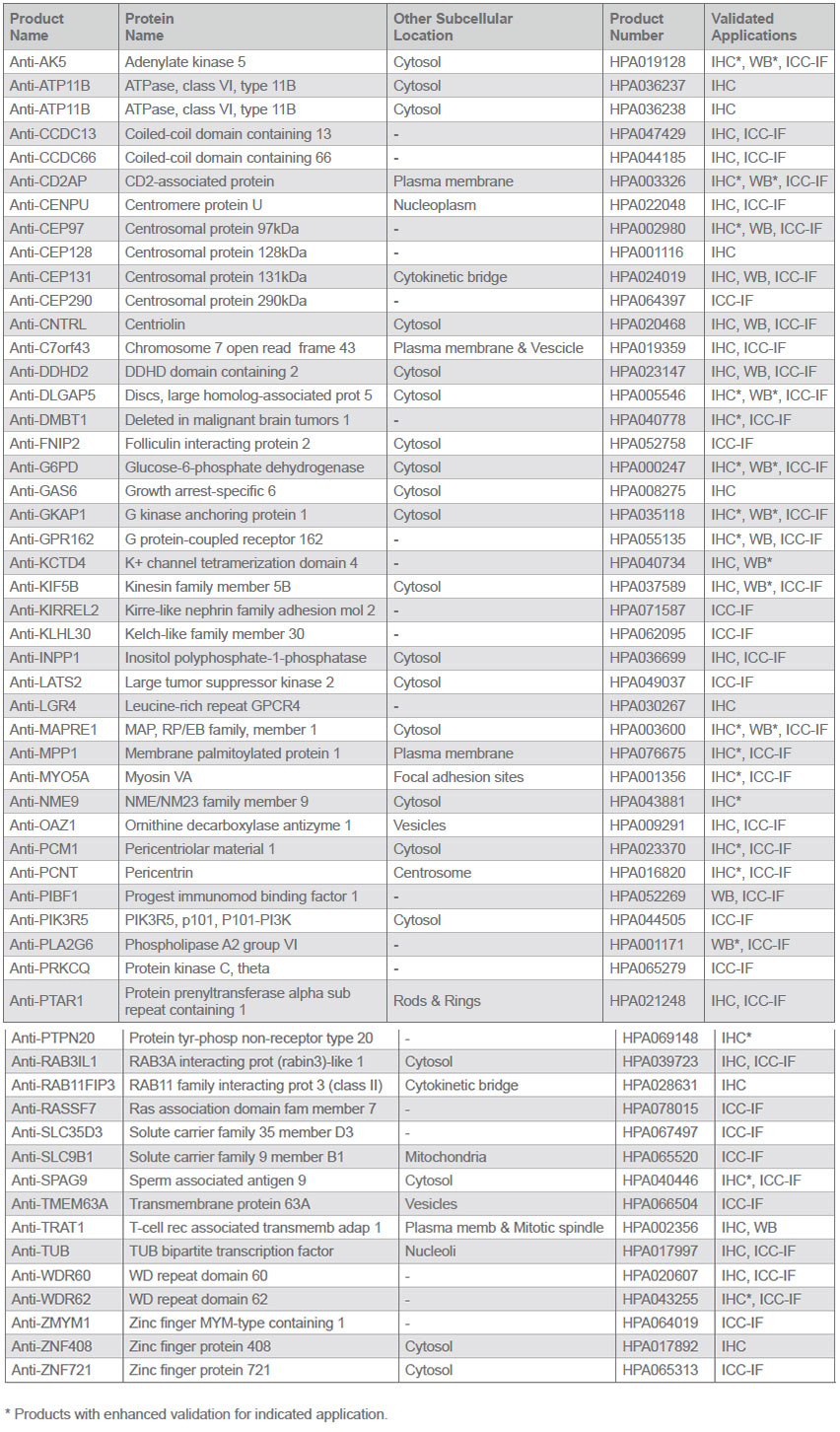 Monroe TO, et al. PCM1 is necessary for focal ciliary integrity and is a candidate for severe schizophrenia. Nat Commun, 2020 Nov 19; 11:5903