QPrEST protein standards consist of a heavy labeled 50-150 amino acid stretch identical to a part of the corresponding human protein. They are designed to have low sequence similarity to other proteins and theoretically form several tryptic peptides. QPrEST standards are accurately pre-quantified by LC-MS/ MS using an amino acid analyzed reference protein.

QPrEST standards are added to the sample of interest before the sample preparation and trypsin digestion. Due to identical amino acids surrounding the cleavage sites, peptides are subsequently formed and released similarly for both the QPrEST and the endogenous protein.

QPrEST standards are available for the majority of all human proteins and are generally produced on demand.

In addition to QPrEST benefits, the QPrEST+ standards also offer:

QPrEST+ standards contain a minimum of one peptide validated according to the CPTAC assay criteria.

To identify the linear range (define slope and intercept), the limit of detection (LOD) and the lower limit of quantification (LLOQ), samples are prepared in the relevant matrix in a multipoint response reversed curve (at least six points).

The suitability of QPrEST+ peptides as quantotypic peptides is further validated by cross-validation by another peptide.
An alternative strategy, when cross-validation is not applicable, is to apply an orthogonal method for validation of the accuracy, e.g. an immunoassay or comparing the generated result to a well-defined reference value.

QPrEST+ products are validated in at least one sample type, e.g. human plasma or a tissue lysate, and are supplied with a recommended spike-in level to use as a starting point. 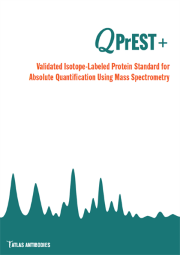 In order for a peptide to be suitable for quantification, it is important that it ionizes well and gives a good signal. It must also be proteotypic, meaning that the peptide sequence is unique to the protein of interest. In addition, it must be established that the peptide could function as a quantotypic peptide.

The definition of a quantotypic peptide depends on which type of stable isotope-labeled standard is used.

QPrEST+ standards are well suited for use in single-point calibration experiments since they are pre-quantified with high accuracy and contain one or more validated peptide(s).

Furthermore, QPrEST+ standards are provided with a recommended spike-in levels that give labeled:unlabeled ratios close to one in a standard sample. To achieve good accuracy and repeatability for single point calibration a ratio close to one is preferred. However, since QPrEST+ peptides have a validated linear response, they generally provide good quantitative results also when measuring at rather large off-ratios (as long as both the heavy and light signals are not too close to the lower limit of quantification).