Where are your proteins? An overview using the Cell Atlas

The human body is the result of a trillion cells communicating with each other. Early biologists described cells as simple membranous sacs containing fluid and a few floating particles. Today we know that cells are infinitely more complex than that. Read here about the Cell Atlas, part of the Human Protein Atlas, for insights into the spatio-temporal distribution of proteins within human cells.

Each protein has a place in time and space

Our knowledge about cell structure has changed considerably over the years. We know that to function properly every cell requires that all the different proteins in it perform a specific task in a designated compartment. Eukaryotic cells contain a membrane-bound nucleus and numerous membrane-enclosed organelles (e.g., mitochondria, lysosomes, Golgi apparatus) not found in prokaryotes.

Organelles are an intricate arrangement of fibers and hundreds of minuscule but distinct structures. Each organelle is a specialized subunit within the cell tailored to fulfill a specific function. The protein’s location and the type of protein in a particular organelle provide information about the organelle function.

At the cellular level, the function of proteins is to catalyze, conduct and control most processes at specific times and locations. Subcellular localization of a protein helps to define the protein function as different organelles offer distinct environments containing a variety of physiological conditions and interaction partners. Consequently, mislocalization of proteins has often been associated with cellular dysfunction and disease1,2.

The Cell Atlas, a part of the Human Protein Atlas

In 2016, the Swedish Human Protein Atlas project launched the Cell Atlas: a database for exploring details of individual genes and proteins in 64 human cell lines thus covering various cell populations in different organs and tissues of the human body. The Cell Atlas provides high-resolution insights into the spatial-temporal distribution of proteins in each organelle. It is a subcellular map of the human proteome based on more than 80,000 confocal immunofluorescence images, created to facilitate functional exploration of individual proteins and their role in human biology and disease.

Within the Cell Atlas, the subcellular localization of >12,000 proteins is mapped on a single-cell level to 33 organelles thus enabling the definition of 13 major organelle proteomes.

The protein localization data is derived from antibody-based profiling by immunofluorescence (ICC-IF) confocal microscopy, while the mRNA expression of all human genes is characterized using deep RNA-sequencing3-5.

Here we have selected a panel of mouse monoclonal antibodies to use as markers for mapping, characterizing, and revealing the role of the protein in the organelles. 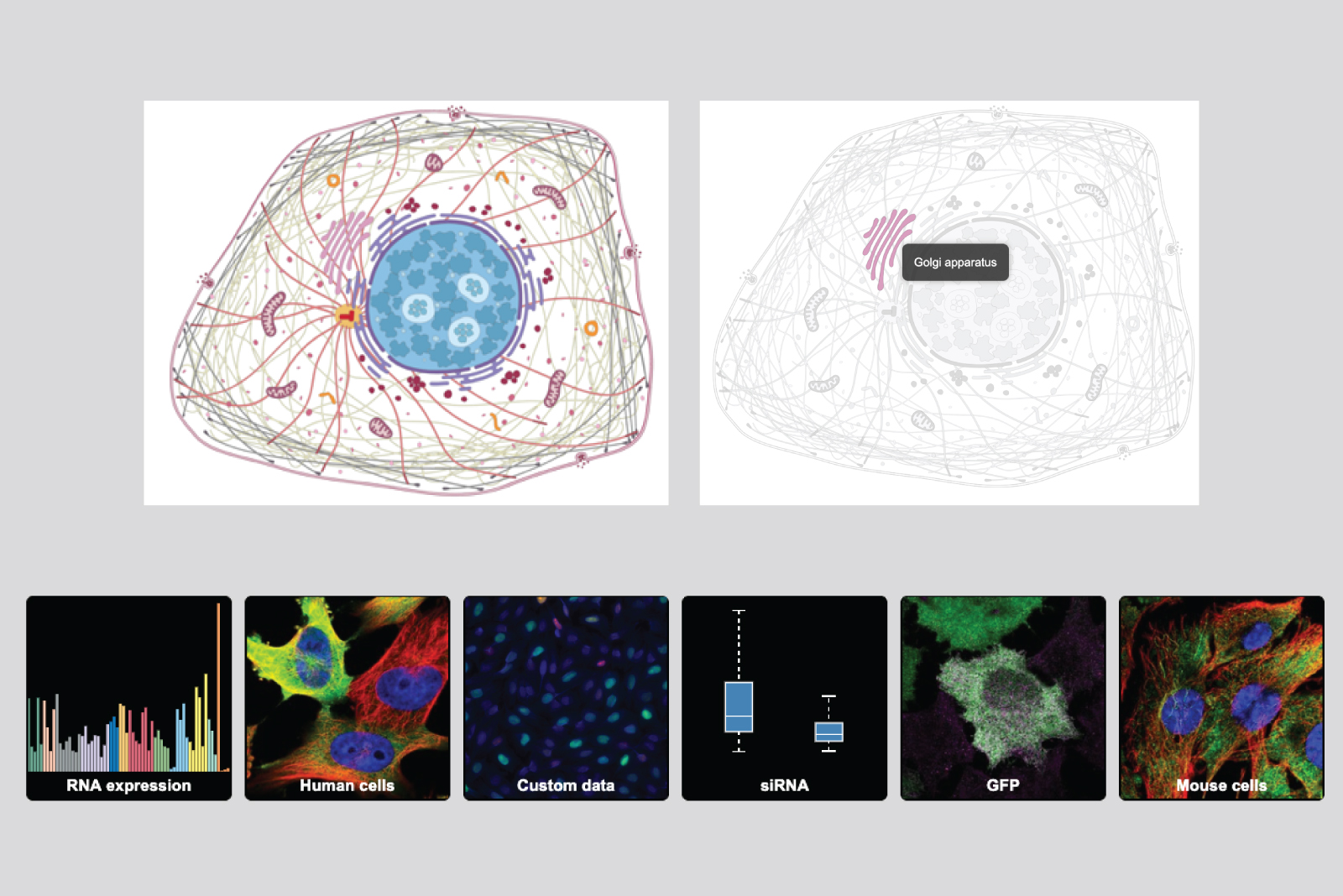 Figure 1. The Cell Atlas provides high-resolution insights into the spatial-temporal distribution of protein in each organelle. Top: in the Cell Atlas organelles can be highlighted and selected by hovering over them. By clicking on each structure, you can read about the proteome of that specific organelle. Bottom: different assays were carried out to detect and measure each protein. The miniature black boxes are clickable and link directly to the respective section. Image composition from the Human Protein Atlas.

Figure 2. Image from the Human Protein Atlas. The Organelles proteome: 34 subcellular structures. The organelle proteome pages are a superb resource where you can find: the subcellular localization of proteins, the protein distribution in the human cell, all antibodies validation and location data for the Cell Atlas and, relevant links and publications. These chapters can serve as an educational resource, but also as a starting point for deeper exploration of the fascinating spatiotemporal complexity of transcriptomes and proteomes of human cells.

Do you know which proteins are expressed in each organelle?

Here you can find basic information about:

Protein distribution in the human cell

The Cell Atlas reveals that approximately half of all proteins localize to multiple compartments and that many proteins show cell-to-cell variation in terms of protein abundance or spatial distribution. The organelle distribution of all annotations for the 12073 proteins localized to at least one organelle is plotted as an example in figure 3.

The plot is sorted by meta-compartments: cytoplasm, nucleus, and secretory machinery, respectively. You can find the plot below on this page on the Cell Atlas on Human Protein Atlas, where each bar is clickable.

Figure 3. Image from the Human Protein Atlas. Bar plot showing the distribution of proteins detected in every organelle, structure, and substructure annotated in the Cell Atlas.

The organelles with the largest proteomes were the nucleus and its substructures followed by the cytosol and vesicles, which consist of transport vesicles as well as small membrane-bound organelles like endosomes or peroxisomes. Half of the proteins (n=6282, 52%) are proteins detected at more than one location and 15% (n=1861) displayed a multiple localization both in expression level or spatial distribution. However, smaller organelles such as the midbody, rods, and rings, and nucleoli also showed a larger diversity than previously recognized.  Explore the organelle proteomes of the human cell in detail here.

Antibodies validation and location data for the Cell Atlas

A particular effort has been made in manually annotating all results regarding the reliability of the staining. The Cell Atlas provides a reliability score for every annotated protein location at a four-graded scale: enhanced location, supported location, approved location, and uncertain location.

The enhanced locations are obtained through enhanced validation of antibodies according to the validation methods proposed by the International Working Group for Antibody Validation (IWGAV) 6.

Read our blog post How enhanced validation by Atlas Antibodies helps you get your research published.

A Journey into the inner universe of human cells

A complete view of human biology can only be achieved by studying the molecular components and functions of single cells.

Curios? Do you want to know which proteins define each organelle and what is their function? Learn how to use the Cell Atlas step by step with our guide and join our journey inside the cell.