Now I see you: the imaging toolbox that improves the detection of primary ciliary dyskinesia

Ciliopathies are inherited human disorders that affect primary cilia genes. The authors of this study took part in our Explorer Program. Read on to discover what they found.

Ciliary motility is essential for moving fluids and particles over epithelial surfaces. Frequently, the limitations of quantitative tests and the lack of awareness delay the diagnosis of cilia diseases. In this blog post, we present antibodies- and 3D imaging-based quantitative super-resolution toolbox for the diagnosis of primary ciliary dyskinesia, a disorder of motile cilia. The authors of this study took part in our Explorer Program. Read on to discover what they found.

Cilia are slender, microscopic, highly conserved hair-like structures or organelles that line the surfaces of individual cells of nearly all mammalian cells. Cilia beat in rhythmic waves and use sweeping motions, moving liquids along internal epithelial tissue in animals. Recent discoveries have revealed that cilia have crucial roles in the signal transduction pathways that regulate intracellular calcium levels and maintain cellular homeostasis. The dysfunction of cilia causes diseases known as ciliopathies.

There is a third type of cilium, known as nodal cilia, but this is only transiently present in the early embryo and is crucial in the establishment of the left-to-right body asymmetry. 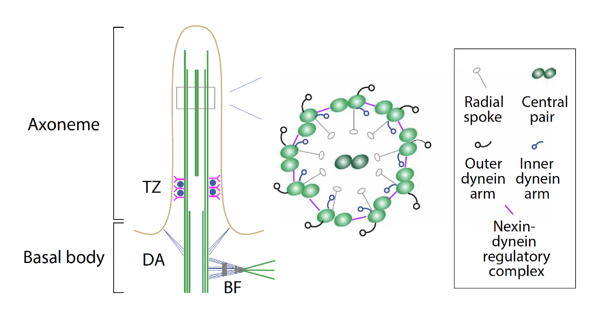 Figure 1. Illustration of the motile cilia structure. A basal body and an axoneme composed the cilia. The cilia axoneme is the core and the most prominent structural component of the cilia. TZ, transition zone; DA, distal appendage; BF, basal foot (Liu Z. et al, 2020).

Motile' cilia are found in the lungs, respiratory tract, and middle ear. Airway clearance of pathogens and particulates relies on motile cilia. These cilia have a rhythmic waving or beating motion. For instance, they work to keep the airways clear of mucus and dirt, allowing us to breathe easily and without irritation. Impaired cilia motility is associated with recurrent infections, leading to a reduction in lung function (bronchiectasis), lung transplant, or death in some cases.

Non-motile cilia are found in the eye, inside the light-sensitive cells (photoreceptors) of the retina, and in most cells of the body that are not dividing (with few exceptions). These cilia act like microscopic train-tracks and allow the transport of vital molecules from one end of the photoreceptor to the other. In the kidney, non-motile cilia bend with urine flow and send a signal to alert the cells that there is a flow of urine.

Ciliopathies are inherited human disorders that affect primary cilia genes. They are caused by both motile and non‐motile cilia dysfunction and are becoming a rapidly expanding disease category. The definition of ciliopathies is evolving while we understand more about them.

The genetic heterogeneity, together with the high phenotypic variability, overlapping phenotypes, and the progressive onset of many features during childhood and adolescence, complicates both the clinical and molecular diagnosis of ciliopathies. 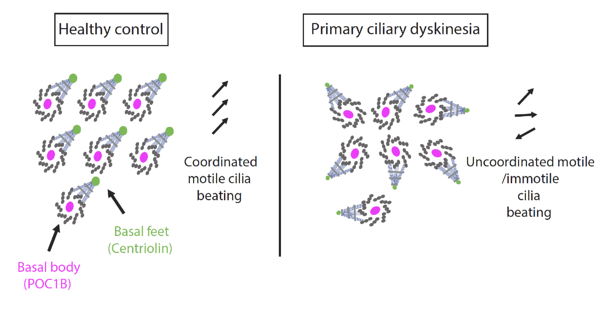 Genetic tools such as next-generation sequencing, high-throughput technologies, and advanced bioinformatics tools developed in the last decade are a powerful way of improving our understanding of the biological basis of ciliopathy disorders.

A need for quantitative methods for improving PCD diagnosis

Primary ciliary dyskinesia (PCD) is an autosomal recessive genetic condition in which the motile cilia in the respiratory system are defective. PCD affects how cilia grow and function (Figure 2).

Disease caused by proteins functioning in motile cilia can cause different phenotypes such as infertility, cardiac malformation, situs inversus, and lung disease. PCD refers mostly to the lung phenotype.

PCD is a disorder characterized by chronic respiratory tract infections and abnormally positioned internal organs. Faulty genes cause the cilia to be immotile, stiff, uncoordinated, and sometimes in the wrong size or shape. Sometimes the cilia are missing altogether. If the cilia don't work well, bacteria stay in the airways, causing breathing problems, infections, and other disorders.

The challenge: from a clinical to a molecular diagnosis

The clinical diagnosis of PCD symptoms like cough and rhinitis is not specific enough for an accurate diagnosis. For this reason, besides the clinical diagnosis, a precise quantitative molecular determination is essential for identifying clear targets for future therapies or for initiating treatments that can stabilize lung function.

However, to date, the molecular diagnosis of PCD has mainly relied on non-quantitative methods with limited sensitivity or that require a priori knowledge of the genes involved.

The generation of the PCD proteome map

Over 50 proteins regulating cilia motility are linked to PCD, and more are awaiting validation. To improve the diagnosis of PCD, Liu, and colleagues from the University of Toronto, Canada, generated a PCD imaging proteome map and developed a toolbox of quantitative imaging methods.

The goals of this quantitative super-resolution microscopy workflow are:

Now I see you, cilia!

After immunostaining, the isolated multiciliated cells were imaged by 3D-SIM or STORM, a technique able to achieve ~25-nm in-plane and ~50-nm axial resolution, and which allows detailed visualization of distributions of specific PCD proteins thus increasing the final image resolution (Figure 3). 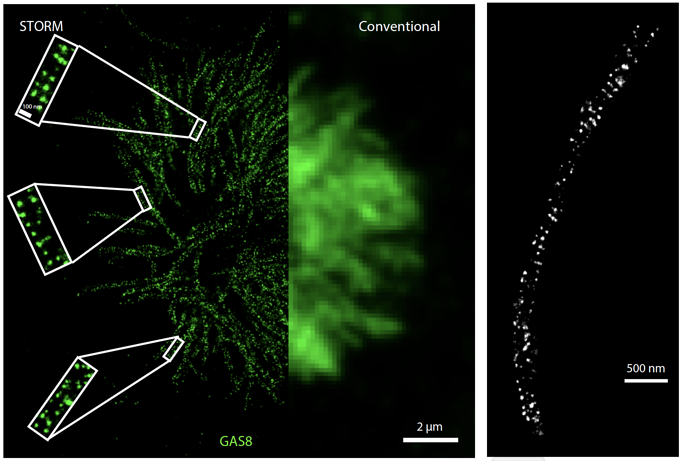