Research antibodies have wide applicability and transferability and are enormously useful over a wide range of domains. Read more to discover how antibodies help progressing science.

Applied biological or biomedical research aims to reach a thorough understanding of the physiology of organisms and to further the development of disease therapeutics.

Some scientific discoveries have narrow applicability or scope and are sometimes serendipitous or even entirely unexpected.

Other discoveries have wider applicability and transferability having proved enormously useful over a wide range of domains. Among the latter are research antibodies. Read more to discover how they help progressing science.

Over the past 50 years, we have observed an outstanding array of breakthroughs that push science to new heights. Advances in technological and computational capabilities continue to unravel novel research fields that have been previously out of our reach. Just consider our atomic-scale understanding of materials, the integration of artificial intelligence (AI) into our everyday life, or the intersection between the central nervous system and microelectronics leading to astonishing advances in basic and clinical neuroscience.

Research antibodies have come a long way from their earliest reference back in 1890. Today, they are central to basic research and used in a wide range of bioscience disciplines such as cancer research, neuroscience, cell biology, regenerative medicine, and immunology research.

Immunohistochemistry (IHC) is the principal antibody-based application and is applied to determine the tissue distribution of an antigen of interest in health and disease in both diagnostic settings and for research purposes (Duraiyan J et al. 2012).

In oncology, for example, IHC is widely used for tumor diagnosis: specific cancer antigens are expressed de novo or upregulated in certain neoplasias. By using antibodies against specific tumor markers, researchers and physicians use IHC to identify and diagnose cancer as benign or malignant, to determine the stage and grade of a tumor, and to recognize the cell type.

IHC combined with primary antibodies specifically recognizing beta-amyloid, alpha-synuclein, ubiquitin, huntingtin, polyglutamine, and others have become a routine tool for sensitive detection and quantification of these abnormal proteins in human tissues and in experimental animal models of human diseases.

The essential role of the antibodies in advancing scientific knowledge is supported by thousands of publications. Here we present three examples of scientific discoveries that could impact a patient’s survival and wellbeing.

Although the role of ATRX in tumorigenesis remains to be elucidated, mutations in ATRX genes have been the subject of numerous studies on the classification and prognosis of glioma, a type of tumor that occurs in the brain and spinal cord. Gliomas can be classified into different pathological grades. Unfortunately, the classification of the World Health Organization (WHO) for the pathological grades of gliomas is still somewhat unclear.

In a recent study published in Oncology Letters (Liu J et al. 2019) the Anti-ATRX antibody and other markers helped in providing the theoretical basis for further research aimed to improve the clinical diagnosis, the classification, and thus the treatment of glioma.

Here you will find a list of publications featuring the Anti-ATRX antibody (HPA001906). 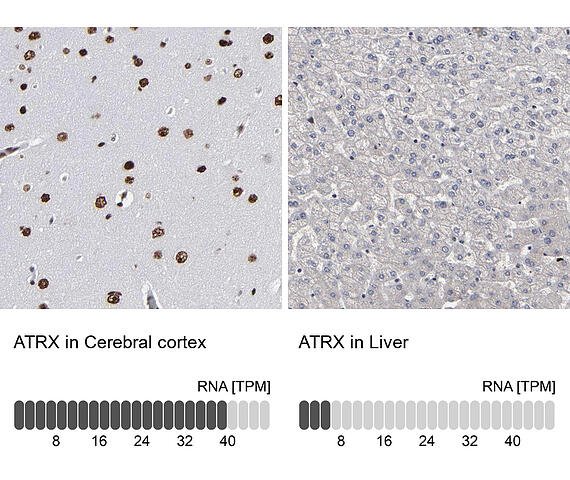 Case study 2: Stroke patients may benefit from an anti‐inflammatory therapy

Many studies have shown the presence of inflammation in the lesions of experimental stroke models. Inflammatory mechanisms, involving macrophages and activated microglia play a pathogenic role in experimental models of stroke and may be useful targets for stroke therapy. However, microglia and macrophages share a common lineage, which is why many markers fail to distinguish these two cell types apart.

The transmembrane protein 119 (TMEM119) is a cell-surface and a specific microglial marker that is expressed on all resting microglia in the rodent and human brain. The advantage over other microglial markers is that TMEM119 is not expressed by macrophages or other cell types.

In a recent study published in Brain Pathology (Zrzavy T. et al. 2018), the authors used TMEM119 as a marker for the resident microglia pool, to perform a quantitative study on the inflammatory reaction in human ischemic infarct lesions. They analyzed the infiltration of lymphocytes, granulocytes, and recruited monocytes and the activation state of microglia in different stages of the evolution of the human ischemic infarct lesions.

The results of this study show that a stroke therapy targeting pro‐inflammatory microglia and macrophage activation may be effective in stroke patients.

Here you will find a list of publications featuring the Anti-TMEM119 antibody. 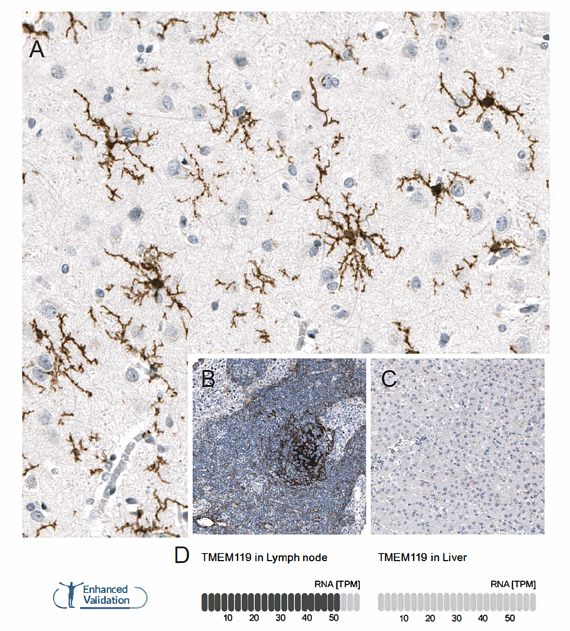 Case study 3: Japanese patients with nephrotic syndrome have the lowest levels of phospholipase A2 receptors

Membranous Nephropathy (MN) is a kidney disease that affects the filters (glomeruli) of the kidney and can cause the release of protein into the urine, as well as decreased kidney function. For more than 50 years researchers have debated the evidence for an autoimmune basis of MN. Work published in recent years has substantially strengthened the belief that MN is indeed an autoimmune disease of the kidney.

Since approximately 70% of patients with idiopathic MN (iMN) have autoantibodies to Phospholipase A2 receptor 1 (PLA2R1) in their serum, PLA2R1 is considered a major target antigen for MN.

Remarkably, a study published in Clinical and Experimental Nephrology (Akiyama S. et al. 2015)  used western blot with anti-PLA2R1 antibody to show that the prevalence of PLA2R1 auto-antibodies was lower in Japanese patients with iMN compared to any other Asian country, USA and Europe (Akiyama S. et al. 2015). This may indicate that the presence of other pathogenic antigens plays a significant role in Japanese patients with iMN.

Here you will find a list of publications featuring the Anti-PLA2R1 antibody.

The three antibodies used in the case studies are available from Atlas Antibodies. In our catalog, you will find over 21,000 primary antibodies targeting the majority of human proteins.